When I heard about the Nov. 5 shootings at Fort Hood, I packed my bags for Killeen. As a former military wife, a military mom, and a clinician specializing in mass trauma, I suspected what I would find – not so much about the motivations for Army Major Nidal Malik Hasan’s murderous spree as about the military mindsets and myths that through the decades have put millions of other servicemen and servicewomen and their families in peril.


I’m not talking about faulty base security or questionable terrorist-tracking mechanisms. I’m much more worried about the U.S. military’s failure to provide adequate psychological care for those who put their lives on the line for us. 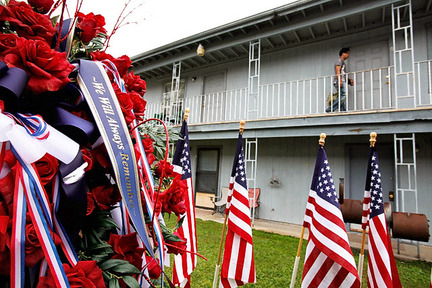 My personal history with military PTSD goes back to when the wounded warriors were mostly Vietnam veterans, including the Marine I married in 1977, who had previously served two tours of duty in that country. For years, as he worked in various locations in the States and overseas, I used my therapist’s training informally and formally to help other service personnel and their families handle mental health issues. More recently, as a college lecturer, I have seen military personnel who were my students break down emotionally because they and their families were facing a second or fourth deployment to one of the wars this country is fighting. Now, as a military mother whose son is back from Iraq and facing deployment to Afghanistan, I talk to North Texas military family members who stop by because they see the blue star pennant on my door. I also serve on a national joint services psychological advisory committee for wounded warriors. Part of the reason I headed to Killeen was to gather information for that panel.

During and after Vietnam, we didn’t have a name to put to the behaviors that so distressed us. I daily heard terrifying tales of anger and domestic violence, sleepless nights, fears of their own behavior – a list of criteria that later would diagnostically define post-traumatic stress disorder.

At that time, in the early 1980s, there were only two civilian social workers for the largest naval base in America. Since the military didn’t historically recognize PTSD as anything but “malingering” or being “unfit for duty,” no system existed, other than long-term hospitalization, to alleviate or treat the problem. Care for psychologically damaged warriors was virtually nonexistent. Any admission of distress meant the end of a career. It was widely believed that if the military acknowledged its problems with PTSD, the government would be forced to pay more compensation to retiring soldiers who were afflicted by it and that the  bill for that would be financially ruinous.

Military-based PTSD, left untreated, becomes more dangerous over time. In doing their duty, people who were taught as children to honor elders, shelter children, respect women, and value life often felt they had to cast aside those cultural lessons. In the fog of war, determining when it is necessary to kill, and who the enemy really is, becomes harder and harder. Eventually, they may find themselves doing or witnessing the unthinkable. They live daily with terror, and many spend a lifetime recycling it.

In recent years, I believed that the situation had improved. However, once the  word got around the neighborhood and the university that I was used to dealing with the emotional fallout of war, various groups and individuals came to me for help.

Almost immediately, I realized that the situation was still dire. Searching for professional resources for local families, I soon found that, other than peer support groups, there is still little infrastructure in place to handle the emotional needs of warriors, their families, and significant others. Galvanized, I began to speak around the country on the imperative to provide services before greater tragedies occurred. When a high-ranking officer heard me speak, she invited me to join the military psychological advisory committee.

Hasan, the Fort Hood shooter, probably did not have PTSD. He had never actually gone to war, never experienced the kind of events that define PTSD. However, when I went to Killeen I met many people who now have PTSD because of his actions. When I spoke confidentially to my colleagues there who knew him, I heard that many people had tried to warn the military brass about him but for one reason or another were not heard. Either he outranked them, or there was fear of insulting his ethnicity, or his contacts with dangerous sources appeared to be legitimate research, or – the one I heard most frequently – the Army desperately needed psychiatrists, and no one was sure what to do with him once they suspected he had serious issues, other than to counsel him on his overt behaviors.

Warning a service person to wear a clean uniform or speak respectfully is counseling behaviorally. Treating a mental health physician who tried to convert patients and argued with them about going to war requires intensive evaluation by mental health clinicians, not a caution to straighten up.

But the scariest thing I learned in Killeen was not that the warning signs about Hasan were downplayed. It was the broader neglect of mental health problems in the military that have been exacerbated by repeated deployments. As an experienced clinician, I am convinced that there are many more time bombs out there. This isn’t about any religious or philosophical rationale; it’s about an exhausted military that needs the funding and the personnel to help those who sacrifice for us daily.

There are warriors who have been deployed so frequently and so long that they have nothing to lose. Many have tried to get help and have been told that their career is over just for asking. More importantly, there is far too little in the way of money, resources, and understanding that warriors are not robots. We must respond. Killeen has one of the highest suicide and crime rates in the country.

The greatest danger to our troops is not a madman gone berserk. It is the complacency of our own citizens in not demanding that the politicians and bureaucrats provide this critical care. Therapists must receive specialized training in the military culture and social dynamics, and their support must be made available to every military family and warrior. If not, the final reward we give them for their service will be a lifetime of pain.

Dr. Shari Julian, a forensic behavioral consultant and clinician specializing in criminal cases and mass trauma situations, can be reached at sjcbc@charter.net.