The golden age of kids’ movies is upon us. I’m not just talking about Pixar, though they’re obviously a huge part of the creative wealth we’re currently enjoying from these types of films. I’m talking about Hollywood’s newfound willingness to place big-ticket family films in the hands of indie filmmakers who do different things with the form. So many kids’ movies are packed with action and plotted to within an inch of their lives – or further – because studio executives are terrified of boring the little ones in the crowd.


Indie filmmakers, on the other hand, aren’t afraid to slow things down to show us the splendors of imagined worlds (Henry Selick’s Coraline) or explore characters’ emotions (Spike Jonze’s Where the Wild Things Are). Nor are they afraid to impose their own personalities on these works instead of turning out a product that seems to have been made by focus group. 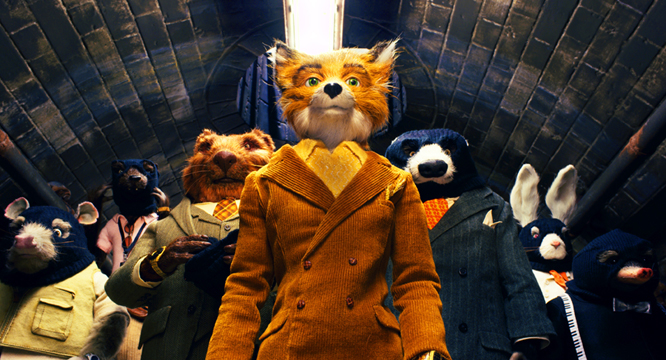 So it is with Wes Anderson’s beguiling, thoroughly delightful Fantastic Mr. Fox. This stop-motion animated film has a witty, schoolboyish spark and insouciance that makes it much more like Anderson’s live-action films like Rushmore and The Royal Tenenbaums than mainstream Hollywood kids’ flicks (the Ice Age movies, let’s say), with their canned wisecracks and thrills. For moviegoers like me who thought Anderson had been losing his touch recently, this is a gratifying return to form.

The script is based on Roald Dahl’s children’s book, a slim piece of work that screenwriters Anderson and Noah Baumbach improve upon by carrying the plot several steps further. By the time they reach the end of Dahl’s story, the movie still has at least 20 minutes to go. Mr. Fox (voiced by George Clooney) is a former master thief who has retired at the behest of Mrs. Fox (voiced by Meryl Streep) in favor of a less risky occupation as a news columnist: “I used to steal birds for a living. Now I just write for a newspaper.” However, Fox seems bored with his second career, because he moves his family into a new house inside a hollow tree that’s conspicuously within sight of three well-stocked farms. Undeterred by the hefty security measures taken by the mean, shotgun-wielding farmers, Fox recruits his foraging friends to carry out sophisticated raids on the farms’ poultry and produce. The farmers, for their part, go to absurd lengths to try to kill Fox and his family.

Anderson’s quirky hipster sensibility, which was starting to wear thin in his live-action films, proves to be bracing in the context of an animated kids’ movie. You can see this in the soundtrack, which is made up mostly of musical selections by The Beach Boys, Georges Delerue, and Burl Ives. These disparate voices somehow work to set this movie’s whimsical homespun-yet-cosmopolitan tone. They’re supplemented by an uncommonly loose score by Alexandre Desplat and a scat-filled song sung by Jarvis Cocker (who voices one of the farmers’ flunkies) that ends with the farmer’s throwing an apple at his head and saying, “That’s weak songwriting!”

The writers have fun with the disconnect between the characters’ human lifestyles and their animal natures. In an early scene between Fox and his real estate broker Badger (voiced by Bill Murray), the two are arguing about fixed-rate mortgages one minute and then snarling, hissing, and clawing the air at each other the next. Good thing they weren’t arguing about subprime mortgages. The characters here are given to bursts of sudden sadness and rage, and a funny rivalry develops between Fox’s son Ash (voiced by Jason Schwartzman) and Kristofferson (voiced by Eric Anderson), Ash’s yoga-practicing cousin who’s living with them temporarily and is good at everything that Ash isn’t.

These neuroses help bring the characters to life, as do the meticulously wrought puppets by the British firm of MacKinnon and Saunders, which previously did the characters in Tim Burton’s Corpse Bride. Their work in that film was ethereal because they were depicting ghosts, but their puppets here are much more tactile; you can see the wind blowing through the fur on their faces and determine the material in the buttons on their clothes. They’re lovingly photographed by cinematographer Tristan Oliver, who gives the movie the same inviting golden hue that he imparted to Nick Park’s Wallace & Gromit films.

The characters’ movements are deliberately nonrealistic, and they have their own sinuous grace. When we first see Mrs. Fox, her upper torso remains perfectly stationary as she scuttles on two legs over a series of hills toward the camera. She only unlocks when she comes to a stop directly in front of us. Later on, when lots of animals are flooded out of an underground burrow, they hover and rotate in place as they’re carried down the tunnel instead of being washed against the sides as they would be in real life, a gentle and mesmerizing effect. For all of its literate dialogue and breezy action sequences, the happiest moments in Fantastic Mr. Fox are created by the puppetry, when the animals dance for joy at gaining access to the humans’ bountiful stores of food. What an appropriate note to strike for a movie released over Thanksgiving weekend. What a great movie for your holiday delectation.