Every frame of director John Hillcoat’s reverent adaptation of Cormac McCarthy’s novel The Road trembles with grim nobility. “Trembles” might be the key word — the near-future America where the movie is set has been plunged, like the rest of the planet, into a gradually intensifying winter season. Cinematographer Javier Aguirresarobe sweeps his camera quietly across dying forests, abandoned cityscapes, and austere coastal shorelines drained of all but the feeblest colors.


As in McCarthy’s book, an unexplained apocalypse has triggered the cold weather and a resulting scarcity of food. The human race has responded by dividing into little cannibalistic tribes that brutally compete for sustenance. Two weary protagonists — Man (Viggo Mortensen) and his son Boy (Kodi Smit-McPhee) — trudge through one perilous situation after another even as Man maintains they are on a proud mission to “carry the fire.” 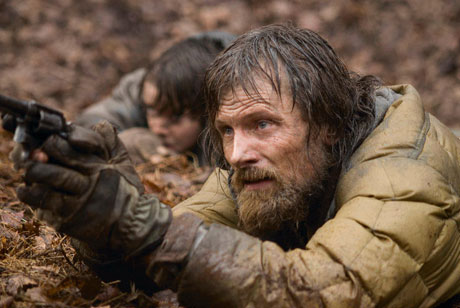 As widely reported, The Road was bumped from two different release dates during the past year. Movie marketers have complained that Hillcoat’s quasi-biblical saga is hard to promote because it dabbles in so many genres: sci-fi, disaster, action, art house, even family dramas and zombie flicks. However, I’m glad to report that Hillcoat, whose only notable feature is 2005’s gory Australian Western The Proposition, has created a unique survival fable whose unsettling power defies categorization. But The Road promiscuously flirts with so many niche audiences that it has no convincing identity of its own. The final experience is thin and disposable, though not necessarily downbeat or graphic. (The filmmaker noticeably restrains himself when depicting the cannibal horrors.)

“Unfilmable” is the adjective that comes up every time someone adapts one of McCarthy’s description-dense, punctuation-light works. All the Pretty Horses was long and episodic but no more so than any other piece of Oscar bait. No Country for Old Men was muscular and crafty, and much as I understand the admiration heaped on that Coen Brothers’ hit, it still felt a little flimsy at the core. If the biggest source of suspense in a movie is a coin toss that determines whether someone lives or dies, then each confrontation has a 50-50 split of possible outcomes: not exactly a nail-biting spread of plot potential.

And so it goes with The Road, whose script is by Joe Penhall, whose previous work consists mostly of British TV. Viewers will sense from the patient start that it will take a long time to learn whether Man and Boy survive. Even Robert Duvall’s abrupt cameo as a hobo sage with cataract-covered eyes feels both inevitable and arbitrary — were Dennis Hopper and Harry Dean Stanton booked elsewhere?

Endurance as a movie theme offers actors many chances to display physical and psychological torment, and a grimy, grunting, grimacing Mortensen goes to town in a performance that is ironically vain and preening in a Method-actor way. Newcomer Smit-McPhee fares much better in a sweetly hopeful turn as Boy, and he bears a strong resemblance to Charlize Theron, who plays his mother. Her name is — surprise! — Woman, and she appears in brief flashbacks: playing the piano with Mortensen, getting pregnant, going into one of those excruciating frontier-movie birth labors, and then wandering away in an ill-defined huff.

The Road suffers from a terminal case of pretentious vagueness. It’s difficult to care about anonymous people dealing with a blurry end-of-the-world scenario that feels dramatically rigged just to make them (sometimes literally) crawl. All this bland misery obviously felt very epic and mysterious to director Hillcoat, whose passion for the project is undeniable. Unfortunately, what looked like a profound journey to him will probably translate as ambitious wheel-spinning to many moviegoers.