So your epic disaster movie broke box-office records and won every Oscar in sight. What do you do for an encore? For 12 years, James Cameron didn’t have an answer, and the film world went on without him. As I watched his latest science-fiction thriller, Avatar, I realized something: I haven’t missed him. I guess it helps that I thought Titanic was overrated in the first place, but this new movie reminded me of his great flaws as a filmmaker as well as his great strengths. 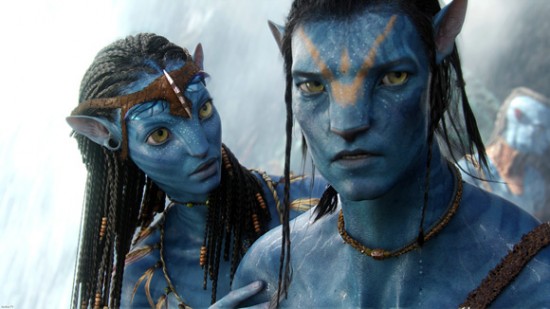 The film takes place in the middle of the 22nd century on an alien planet, the Earth apparently having become unlivable. The main character is Jake Sully (Sam Worthington), a paraplegic Marine who travels to the planet Pandora, a place with rain forests and mountains that float in mid-air. It’s populated by a race of 12-foot-tall blue-skinned natives called the Na’vi who control the resources that the humans need to survive. With interspecies relations in an uneasy state, Jake is called on to hook up his brain to a specially engineered Na’vi body to infiltrate the culture and learn about the natives, an assignment he accepts so he can get his legs back. He soon discovers that he’s just a pawn in an ongoing dispute between the Earthlings’ military and scientific factions about whether the humans should coexist with the Na’vi or simply wipe them out. Is there really much doubt as to which side he’ll choose?

There’s a good half-hour stretch early in this 162-minute movie in which we, along with Jake, get our first glimpse of Pandora. It’s dazzling stuff all right, a fully conceived world that you can easily imagine walking around in. The native fauna and flora are gloriously realized, from lichens that bioluminesce when they’re stepped on to giant, brilliantly colored pterodactyl-like creatures that the Na’vi ride through the skies. This movie is a cryptozoologist’s dream come true.

A genius at the technological aspect of filmmaking, Cameron is an idiot at everything else. The romance between Jake and a native female named Neytiri (Zoë Saldana) is bland and riddled with terrible dialogue – the bit where she spares his life because “his heart is pure” is cringe-inducing. The movie’s politics are shopworn, with an uninteresting bunch of greedy corporate managers and meatheaded, trigger-happy soldiers standing in as villains. Worse, the Na’vi are simplistic caricatures who live in harmony with nature. Peel back the special effects and the sci-fi trappings, and this is just another movie about the evil white Europeans victimizing the innocent Africans/Native Americans and ruining everything. That’s dull.

Too much of this movie is bathed in that same blue light that we saw in Cameron’s previous films like Aliens and The Abyss. This is not just an irritating mannerism; it reminds us that in the last 12 years filmmakers have emerged who marry Cameron’s technical wizardry with greater humanity and storytelling finesse: Guillermo Del Toro, Peter Jackson, District 9‘s Neill Blomkamp. Avatar uses the latest in special-effects technology to tell its story, but it’s only the same old story. That’s why the movie already feels like a relic of a bygone era.