Jason Reitman has now directed three films, and so far the most famous is his second one, Juno. I suspect we’ll look back on that movie and see it as atypical of his work. Whereas Juno is about a teenage girl and written in Diablo Cody’s unique style, his first movie, Thank You for Smoking, and now his current one, Up in the Air, are about professional men in the primes of their lives and written by Reitman himself in a much more polished way. What they all have in common is that they’re really good. Up in the Air is a breezy comedy that catches the country’s recessionary mood, but never mind that. It’d be a great movie no matter what the economic climate. 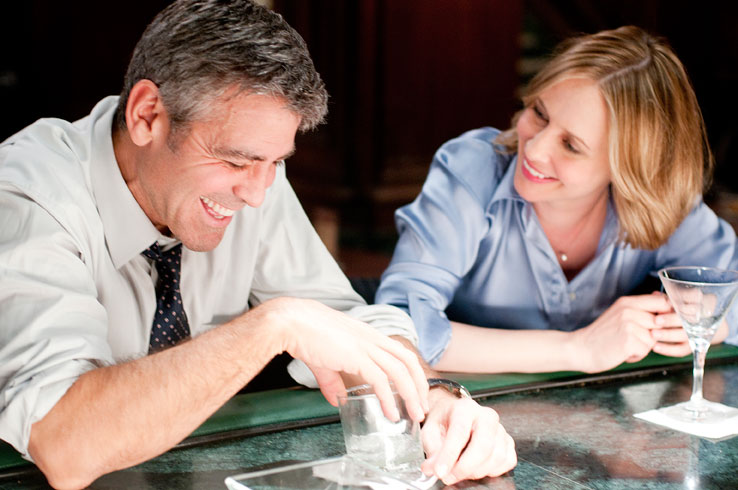 Loosely adapting a novel by Walter Kirn, Reitman and co-writer Sheldon Turner transplant the book’s main character into a completely different plot. Ryan Bingham (George Clooney) is a career transition specialist for a management consulting firm, hired by large companies to fire their employees and then tell them that it’s actually a good thing. With the economy in such a crappy state, Ryan’s business is booming. The supreme awfulness of his job is brought home in montages of workers reacting to his bad news with confusion, anger, and tears. Offsetting the misery is a quick, hilarious montage of one fired office drone (Zach Galifianakis) going postal in various ways.

Whatever reservations Ryan has about his work are overwhelmed by his love of travel, which his job lets him do for more than 300 days a year. He loves the sanitized buzz of airports. He loves having flight attendants and hotel concierges greet him by name. He loves the constant yet fleeting contact with others – in his sidelight as a motivational speaker, he tells people that relationships are unnecessary baggage. He hates his one-bedroom apartment in Omaha, keeping it as pristine as a hotel room. He loves his elite memberships in rewards programs and takes particular pleasure in piling up American Airlines frequent-flier miles, even though he perversely doesn’t plan on using them. He just wants to attain 10 million miles.

So he can’t stand it when Natalie Keener (Anna Kendrick), a tiny 23-year-old junior executive at his home office, proposes sweeping organizational changes that would make Ryan do his job over the internet. In a great, tense scene, Ryan immediately trashes her idea in front of their boss (Jason Bateman) and challenges Natalie to fire him in a role-playing exercise. The boss reacts by sending Natalie on the road with Ryan to see him work, which pleases neither of them but eventually forces them both to a reckoning with their decisions in life.

In contrast with Juno‘s scruffy, lo-fi manner, Reitman directs this movie stylishly, with cinematographer Eric Steelberg dwelling lovingly on the smooth surfaces of Ryan’s first-class accommodations. An early sequence of half-second shots neatly summarizes all the precisely tuned motions that Ryan makes to get himself and his carry-on bag through airport security. This is a bravura piece of work, but the movie has much more than virtuosity to recommend it.

It also has dialogue that’s good enough to eat. The best stuff comes from Ryan’s relationship with Alex (Vera Farmiga, sexy, funny, and striking all kinds of sparks off Clooney), another veteran traveler whom he hooks up with in a Dallas hotel. When they first meet, their debate over the relative merits of rental car agencies isn’t just clever banter. It’s a merging of two kindred spirits, so kindred that Alex later tells Ryan, “Just think of me as yourself, only with a vagina.” The punchlines fly thick and fast, and the writing is no less sharp during serious interludes like when Alex unexpectedly counsels Natalie on romance.

The revelation here is Kendrick, a Broadway star whose biggest film role so far has been as a non-vampire in the Twilight movies. She fumbles Natalie’s out-of-the-blue emotional meltdown in a hotel lobby; the scene is supposed to be genuine and funny at the same time, and Kendrick strikes the wrong balance by crying like a 6-year-old whose favorite doll has been broken. Elsewhere, however, she shows no fear in the face of her famous scene partner, matching Clooney stride for stride during their verbal sparring matches. She’s terrific during a painful, slow-rolling scene with Natalie demonstrating her remote-firing method on a middle-age worker and realizing that she’s too much of a human being to take the strain of her chosen profession.

The film forces Ryan to confront his glibly articulated solitude by calling on him to save his sister’s wedding in Wisconsin, and the resulting interlude would tip the movie over into sentimentality if Reitman didn’t direct with such control and grace. He seems to guide the story toward a conventional romantic ending, only to veer in a whole other direction. The movie ends perfectly on an ambiguous note with Ryan, having spent years setting other people adrift, looking up at a destination board and seeing the boundaries of his life and the terrifying possibilities lying beyond. There couldn’t be a better title to this brilliantly told story than Up in the Air.