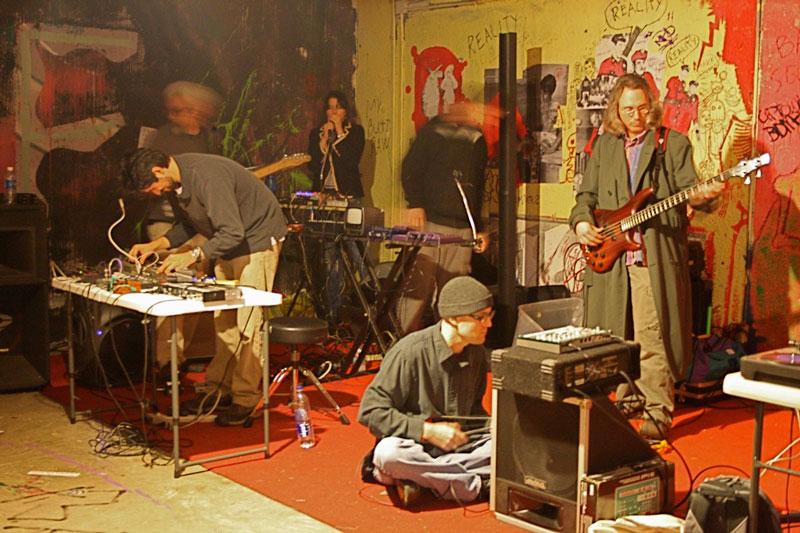 There are three core members, all involved in other musical and non-musical projects. When not writing for Fort Worth Weekly or The Stash Dauber, his popular blog, guitarist Ken Shimamoto, who spearheaded the defunct outré collective PFFF(F)T!, also plays in the Stooges tribute band Stoogeaphilia. Electronics wizard Terry Horn plays his laptop and homemade instruments with frequent HIO contributor Mark Cook on Warr guitar in the avant-garde outfit Yanari. Horn also brews oddball reductionist improvisations in his solo project, Jin Men Ju, and bangs out minimalist junk noise with Blind Umizato. Aside from being an ad hoc bassist, tinkering with electronics, and building and playing an Indian folk instrument in HIO, Matt Hickey records bands at his Weatherford barn and creates electronic mischief in his solo experiment, Joe and the Sonic Dirt From Madagascar.

In addition to the core members, the group has regular collaborators. Matt Hembree plays bass in HIO when he isn’t holding the bottom end for at least 900 other bands, including Stoogeaphilia, Goodwin, Pablo and the Hemphill 7, the Police tribute band Protect and Swerve, and The Underground Railroad. Bass trombonist Marcus Brunt lives in New York but as a computer contractor often travels between Gotham and the Fort.

HIO also recruits other musicians to collaborate in live settings. The open environment has encouraged diverse contributions. Local musicians such as The Great Tyrant drummer Jon Teague and electronic experimentalist Michael Chamy, from Zanzibar Snails, have jammed with HIO. So have Sarah Alexander and Michael Briggs, both from the adventurous Vexed UK. At HIO gigs, as many as 10 musicians can be onstage at one time. Concerts range from cacophonous walls of noise to enigmatic, shape-shifting soundscapes – the music is excessively layered and textured, expressing emotions and visions more than following a distinct genre.

The group came together almost by accident. After Horn and Cook witnessed the final PFFF(F)T! show in December 2008 at the now-defunct Fairmount, they approached the troublemakers afterward and proposed that Yanari and PFFF(F)T! join forces.

HIO was born in February at the combined group’s first – and only – practice, which Shimamoto swears was more of an introductory jam session. A few weeks later, the newly merged act played its debut concert. Billed as Yanari/PFFF(F)T! at the now-defunct Firehouse Gallery, the group was downright scary. The performance didn’t just clear out the parking lot, Horn said. “It emptied the neighborhood.”

The eccentric ideas driving HIO and the concept of HIO itself continued to expand exponentially as the group played more shows. The musicians were constantly tinkering with new instruments, players, and styles.

After a September gig at the Firehouse, the venue’s last concert, the HIO guys realized that something was missing – or rather that something wasn’t missing. The drums too often had overpowered the music’s subtler elements and dictated the flow of the performances. Result: The drums were dropped.

Since its three core members first played together in February, the ensemble has kept its style constantly in flux. But the incessant change isn’t due solely to the group’s penchant for improvisation. Aside from guitarist Shimamoto,  HIO members play different instruments and experiment with new mixes at every performance. “To me, improv is a metaphor for life,” Shimamoto said. “It’s not just a way to play music. It’s a way of thinking about everything.”