Breaking Light is yet another performing alias of Burleson-based guitarist Kavin Allenson (who usually goes by “Kavin.” with the period). Aside from performing solo acoustic, Allenson occasionally joins forces with fellow fret mathematicians Bill Pohl and Darrin Kobetich under the rubric Strung Drawn and Quartered. In Breaking Light, however, he runs his electric guitar through a gamut of loops, delays, and other effects to create ethereal, orchestral soundscapes, some composed, others wholly extemporaneous. 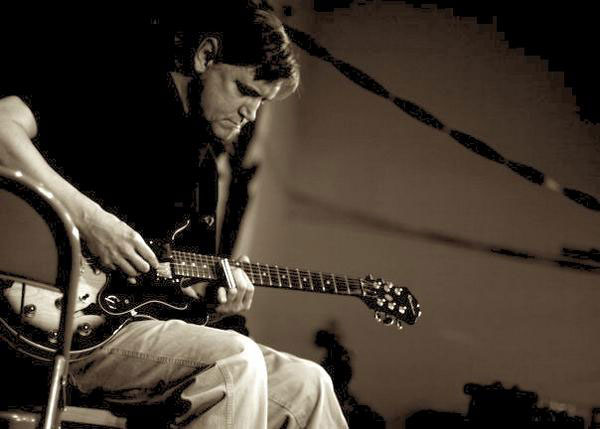 Allenson is a player steeped in blues and classic rock influences, and he was quite affected by Coward, the overdubbed solo album released earlier this year by Wilco hired gun Nels Cline. Pareidolia‘s title was inspired by a psychological phenomenon in which a viewer or listener perceives significance in random images or sounds (like the man in the moon, an inkblot test, or Jesus in a piece of toast). The album’s creator is selling himself short, though. There’s more to the sounds he generates with his axe and array of devices than meets the ear.

On “Skeptimystic,” Allenson uses a sampled staccato riff to set up a galloping rhythm over which he overlays a gauzy haze of chords. “Cactus 1539” juxtaposes recordings of radio transmissions with amorphous washes of sound. On “Blue Hour,” he constructs an intricate structure of shimmering chords and delicately unfolding, pointillist, single-note lines over an electronic pulse that sounds like an amplifier’s tremelo effect. Elsewhere, he uses an E-bow to create warmly incandescent flute- or violin-like tones.

At different times, his multilayered creations recall Tangerine Dream, Meddle-era Pink Floyd, and Robert Fripp’s collaborations with Brian Eno. The results are either New Age psychedelia or a good soundtrack for a waking dream. If you’re curious, catch a show — it’s the only way to obtain this CD.

Editor’s note: Allenson once opened for one of the writer’s bands.