The Wreck Room will always be a mythical place in both local and national lore. The Wreck, which was razed a couple of years ago after a 10-year run to make room for Progress, was the kind of place that bands as far flung as New York and Seattle played, that was memorialized in more than one song, and where a lot of cool shit went down. 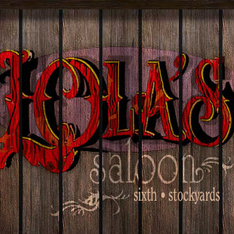 There were the after-hours parties soundtracked by Thin Lizzy, Doosu, and (especially) old VH that lasted ’til early morning, and there was the (hairy) time when a punk band shot a roaring column of flame off the stage and right above concertgoers’ heads — and the one guy who held his cigarette to the flame to get a light. The Wreck’s owner eventually went on to found both Lola’s Saloon Stockyards and Lola’s Saloon Sixth, the site, incidentally, of another Wreck-ian occurrence: On a slow night not too long ago, several Netherlanders on holiday dropped by. How did they hear of the place? One of them owned a t-shirt emblazoned with a semi-BeDazzler’d screenprint of a flier for Lola’s opening night a couple of years ago. Some Danish company named Samisu somehow got hold of a copy of the flier and just put out the shirt. Company merchandisers probably thought the flier was cool or kitschy or something, though the design is mostly just text-based. Evidently, as the wearer informed the bartender, the shirt wasn’t cheap, either. Maybe Lola’s should sue for copyright infringement. But could you think of anything more corporate and less underground-y than suing someone for broadcasting your name all over the globe? And, yeah, the Lola’s guys probably have much better things to do — like put on shows and drink beer — than start some legal fight. I’m not saying that Lola’s is the second coming of the Wreck — Lola’s bathrooms are much cleaner, for one thing, and the place isn’t nearly as lawless — just that I’m heartened to know that there’s at least one place in town where the underground still rules. … As first reported here (“Fort Worth Sings,” Jan. 27, 2010), a few young locals have put together a benefit concert for relief efforts in Haiti. Though there is no word yet on which Fort Worth bands will be playing the March 27 event, there’s a location: Magnolia Green Park on the South Side, the site of Fort Worth South Inc.‘s summer concert series, First Fridays on the Green. Fort Worth Sings also has put up a web site, www.fortworthsings.blogspot.com. … In every issue of Texas Music Magazine is a compilation CD of new-ish Lone Star music of the “Texas” variety. Of the 16 songs in the quarterly’s big 10th anniversary issue, Tex Mix 2010 (Winter) CD, only one song is by a Fort Worth outfit, “Cold as Her Heart” by Manning-Dickson. I haven’t heard the tune, but I’m willing to bet that the lyrics reference beer. If I’m wrong, I’ll buy you a keg of the stuff. Make that 10.