A long time ago, I used to really like Jack Johnson. And Sublime. And Bob Marley. In fact, if there’s a band you can associate with drunk dudes in college, it may still be lurking on my iPod. I’ve long since abandoned party-friendly, island-style, good-time acoustic balladry, and if you ask me about it, I’ll have no idea what you’re talking about. In other words, I grew up. 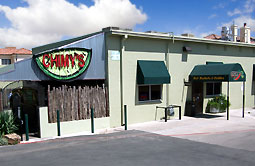 Now I like bands you can associate with drunk dudes in parking lots. Forget about my comparative maturity, though. I still have a skeleton in my album closet. Every time its bleached, vacant grin leers from the darkness, I am forced to concede that all my musical opinions are null and void.

You might think it’s all-Sabbath-all-the-time with me, but for all my tough talk, I have to be honest. I am a Jimmy Buffett fan.

It’s true. At one time, I had something, like, 10 or 12 Hawaiian shirts. I’ve seen him and his Coral Reefer Band five times, and only two of those shows were with my parents. I’ve passed out and I’ve rallied and I’ve sprung a few leaks and I’ve done all that while tailgating around baby boomers wearing foam parrots and lobster hats. I’ve done that dumb fins-to-the-left, fins-to-the-right dance, and when the volcano blows, I don’t know where I’ll go either. I do know that if Jimmy Buffett would stop playing with people like Kenny Chesney, I’d happily go see him again. I’d even wear a fake fucking parrot. So I like Jimmy Buffett, served with all the trimmings, save for one.

Specifically, I don’t like tequila, which, if you’re an eighth-grader, is the part of a margarita that makes an evening at Joe T’s seem like the best night of your life. My distaste stems from a trip to Hermosa Beach, where I was given a Cuervo shot the size of a swimming pool. If you’re looking for that last shaker of salt, it was there on the floor — right next to my puke. But even if margaritas were made with whiskey, I wouldn’t drink them, unless I was on a date with your mom and she ordered a round while I was in the bathroom. The tequila is bad enough, and when you combine it with all the other ingredients … ugh! Makes me nauseous just thinking about it.

Nonetheless, last Tuesday, I went to Chimy’s Cerveceria for the express purpose of having a margarita. Or rather a Rahr-garita. Fort Worth singer-songwriter Sam Anderson, who has a Rahr Brewery-sponsored weekly gig there, told me about this concoction and insisted I try it. So I did, and I was pleasantly surprised.

Rahr-garitas are basically the same thing as a regular margarita, but instead of a couple ounces of cactus-piss, it has about half a bottle of Rahr’s Stormcloud IPA. I know – it sounded gross to me, too, but it’s not. If you’ve ever gone to Central Market or Whole Foods or wherever and bought an expensive soda in a bottle, that’s sort of what a Rahr-garita tastes like. The carbonation blends the drink better than your straw, and combined with the flavor of the beer, the bubbles mute the cloying taste of the sour mix and triple sec. I’d go as far to say it’s refreshing. Waste away in Margaritaville if you like. I’m cruising over to Chimy’s. — Steve Steward