When I first hit the Fort back in ’78, Robert Ealey’s New Bluebird Night Club seemed like a hipster utopia, where TCU kids and their parents – parents who might have partied at the Skyliner Ballroom in the early ’60s – rubbed shoulders with hippies, punks, Kim Wilson wannabes sporting nascent soul patches, and Lake Como neighborhood folk. 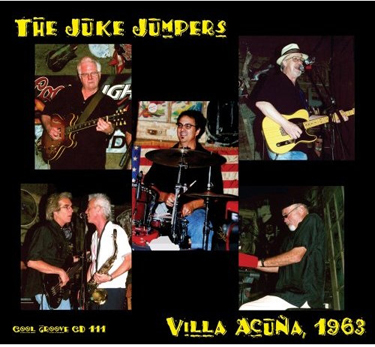 The Juke Jumpers were the first band I saw there and were much more than “just a blues band.” Fronted by Jim Colegrove, who’d been a rough-hewn Midwestern rock ‘n’ roller in the ’50s and a laid-back Woodstock country rocker in the ’60s, the Jukes also had guitarist Sumter Bruton, possibly the pre-eminent modern practitioner of T-Bone Walker’s elegantly behind-the-beat solo style. The band mashed up jump blues, rockabilly, and Louisiana swamp pop into an incredibly danceable mélange.

Though the Jukes disbanded in 1994, the members have been reuniting sporadically since ’97 and recorded Villa Acuna, 1963 over the last three years in Colegrove’s home studio. They’re hardly the same band they were back when – Colegrove’s songcraft has matured, for one thing – but stickman Mike Bartula still swings the shuffles and slams the rockers, Jim Milan walks the bass, and Craig Simecheck tickles the keys while Colegrove, Bruton, and sax maniac Johnny Reno remain their classic selves. From the jumpin’ jive of “Pink Heart Days” to the bayou funk of “Nowhere City Night” to the title track’s Doug Sahm-inspired Chicano rock (complete with cheesy organ), this is one fun ride.