The recently opened Cowtown Diner in Sundance Square has been getting some flak for daring to use the word “Cowtown.” Perhaps it’s because Fort Worth is shining itself up as more culture than cowboy, or maybe it’s that Sundance Square sometimes forgets its roots. I don’t have a problem with that. But I do have a little problem with the word “diner.”

Any place that charges more than $10 for breakfast and has a full bar and serves booze — and food — until 2 a.m. on weekends is stretching the definition of the term. However, the food part should be welcome news to partiers looking to soak up their Jack-‘n’-Cokes or Shiners with a late-night snack. 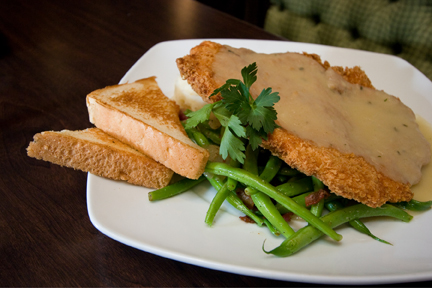 The neon signs outside manage to make the place retro-hip. Inside, the dark wood of the bar and spring green and chocolate brown décor are very visually appealing: definitely no Naugahyde here. The menu is inventive and slightly cutesy. Breakfast options, for instance, include That Boy Can Pack Some Groceries, a plate big enough for two cowboys. Since my group came in on the late side of brunch, we had to graze from the brunch and regular menus, which was hardly a problem. The menus are stuffed with a boggling variety of classics and comfort food.

We started with the King Ranch queso. The creamy, non-chunky queso was seriously some of the best ever to pass through these lips, thanks to a hefty dose of cumin, which made the dish slightly sweet. And no Ro-Tel chiles here, just an intriguing combo of four cheeses, a hint of tomato, poblano peppers, and – adding an odd appeal – mushrooms. The queso was creamy enough to still be edible halfway into the meal and provided a lovely dipping sauce for some of the later courses. We also tried the ranch-style bean hummus but pronounced it as plain ol’ bean dip. The pita chips were the best thing about that appetizer.

The diner employs a lot of beef short ribs, pork ribs’ larger, more tender cousins. In every beef-rib-laden dish we tried — and we tried several — the meat was seasoned perfectly and fall-apart tender, not chewy. From the brunch menu, the short-ribs Benedict was a perfect blend of gooey, soft-cooked egg, savory shredded beef, and garlicky Texas toast. The tabasco hollandaise was not as spicy as it sounded, just simply creamy, slightly tart goodness.

From the lunch menu, we picked the chipped brisket Reuben sandwich. Seriously, who would use the words “brisket” and “Reuben” in the same sentence? But the peppery beef and salty ‘kraut made a lovely contrast to the creamy Swiss cheese and decadent Thousand Island dressing. Call it one of Cowtown Diner’s superior quirky pairings and one of the better values on the menu, as it came with a choice of fries or sweet potato fries.

The cobb salad was a disappointment. The chicken breast was over-grilled and came out tasting burned, leaving me wishing I’d picked the brisket as my protein topper. And the chef put sprouts on top of the salad. Sprouts? In Cowtown?! However, the bounty of romaine and radicchio lettuce, creamy avocado, dainty grape tomatoes, blue cheese, and chunky house-made blue cheese dressing made up for the sprouts. The salad was actually enough for two meals.

Usually when a restaurant first opens there are some glitches. In the case of the Cowtown Diner, the service was absolutely flawless. Patsy provided some great recommendations and gracefully dealt with one of our pickier eaters. The only real misstep had to do with the dessert menu, which, a month out, is still being tinkered with. On the day we visited, several sweets, including the fried pie, were not available.

We settled for the cheesecake but ended up pleasantly surprised. Served on a bed of your choice of raspberry or strawberry purée, the cake was obviously homemade, with a caramel-y crumb crust and dense, barely sweet filling. We also tried the banana coconut pie, which was a bit of false advertising. There was no coconut to be discerned, and the pie base tasted as though it had been made with green, unripe bananas. The middle was a funky pink color that bore no resemblance to anything in the pie’s name. The crust, though, was definitely homemade and had just the right flaky texture.

Overall, the Cowtown Diner’s hits — the location, the beautiful décor, excellent service, and some of the inventive menu items — outweighed the misses.