When you watch slasher flicks and other movies that kill off innocent characters like ants, do you feel bad for those onscreen victims? 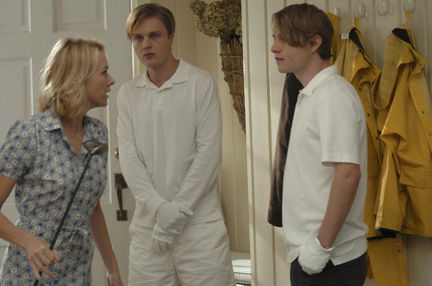 Do you wonder if they’re leaving behind parents and loved ones who’ll miss them? Probably not, but I do. This is perhaps a sign that I possess exquisitely refined moral sensibilities that make me a much better person than you. More likely, it means I’m perverse. As far as perversity goes, though, I’ve got nothing on Michael Haneke. Shortly after he made Funny Games in his native Austria in 1998, Haneke (pronounce his name like “Hanukkah” and you’ll be close enough) left his homeland to direct a string of well-received films in France, the last of which, Caché, got quite a bit of play on our shores two years ago. Now comes his American debut, which is a shot-for-shot English-language remake of Funny Games. That’s doubly and fittingly perverse, though not enough to make this psychically ravaging movie worth the bother.

It begins on a hot summer day, as Ann and George Farber (Naomi Watts and Tim Roth), their young son Georgie (Devon Gearhart), and their golden retriever arrive at their lake house. As they’re settling in, two guys (Michael Pitt and Brady Corbet) come to their door asking to borrow eggs. They introduce themselves as Paul and Peter, though they go on to call each other “Tom” and “Jerry,” as well as “Beavis” and “Butthead.” These prep-school types seem harmless enough at first; they wear tennis whites and address the Farbers respectfully as “sir” and “ma’am” in their soft, diffident voices. They maintain their good manners even while they imprison the Farbers in their house, torture them, and murder them one by one.

The twist is that there’s no twist. What I’ve just described is the movie’s entire plot. We’re conditioned by mainstream films to expect the family to fight back and vanquish the killers, and Paul points this out when he periodically turns to the camera and asks us in that same polite tone whether we’re enjoying the film. (“Were you expecting character arcs and plausible plot development?” Paul’s a regular Brechtian, isn’t he?) We want at least the little boy or the dog to escape. No such luck. When Ann seems to kill Peter late in the film, Paul reverses that in a totally absurd way, and the bloodshed goes on.

There’s no heroism here, nor any redeeming qualities. The innocent die, the murderers roam free. Yet this isn’t an Eli Roth-style torture porn fest, because Haneke scrupulously keeps all the violence offscreen. When the killers do something to George Sr. with a knife, the camera doesn’t show us what happens but stays on Ann’s traumatized reaction as she sits helplessly tied up next to him on the couch. By the same token, when Peter and Paul force Ann to strip naked, we don’t see her body, just her humiliated face. (You know Hollywood hacks wouldn’t have been this discreet.) So even if you side with the killers and are looking for blood and gore, you won’t get any of that sort of gratification. Whatever your tastes are, this movie is uniquely designed to ruin your day. Haneke’s not out to torture his characters. He’s out to torture you.

You may ask, what’s the point? Well, the filmmaker is commenting on the nature of cinematic violence. He’s looking for a new way to make it horrifying, by taking all the entertainment value out of it. The result is anti-entertainment, and if you find it unwatchable, that’s the best way Haneke can think of to convey his message that in real life, people inflict bad stuff on you, there’s nothing you can do, and all the movies that tell you different are just feeding you lies. This is worth saying. The trouble is, my summarization does that every bit as well as the movie does, and it doesn’t take 108 minutes to read. In the film’s defense, Funny Games does boast ruthlessly skilled cinematography (Darius Khondji soaks everything in brilliant white light) and some superb performances (Pitt’s born to play magnetic psychos). However, they can’t keep this new version from emerging as dry and airless as the German-language original, and I can’t figure out why Haneke felt the need to revisit it when he has spent the intervening years making better stuff like Caché, whose air of mystery and intrigue is sorely lacking here.

The movie would still be a useful corrective to Hollywood conventions if it hadn’t been decisively trumped by a similar film from two years ago. Karen Moncrieff’s The Dead Girl was another slasher flick that showed everything but the slashing. It played the genre for closely observed character study, and its final shot of the murder victim, looking radiantly happy in her last untroubled moments, conjured up more genuine horror than anything Haneke has ever done. That movie was rich because it let in emotions other than fear. Funny Games shuts them out, and shuts you out. Hardly surprising, given that hurting you is the main object of Haneke’s little game.