Oscar Wilde once wrote, “All bad poetry springs from genuine feeling.” I’m not sure to what extent that applies to movies, but one reason sincerity doesn’t carry a lot of currency with me is that I’ve seen so many bad films that came straight from their creators’ hearts. Remember Me is throbbingly, achingly sincere. It’s also a pretty heinous moviegoing experience. 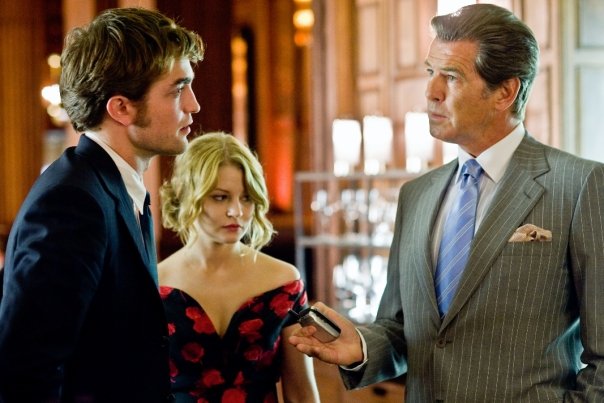 The main character is Tyler Hawkins (Robert Pattinson), the directionless, unemployed 22-year-old son of a big-shot New York lawyer (Pierce Brosnan) whose neglect of his family led to the suicide of Tyler’s beloved older brother. Meanwhile, college student Ally Craig (Emilie de Ravin from TV’s Lost) is the daughter of a cop (Chris Cooper) who’s been overprotective of her ever since her childhood, when she witnessed her mother’s murder during a subway mugging. After a run-in with Ally’s dad, Tyler initially starts dating Ally to get back at him, but unexpectedly falls in love with her for real as these two damaged souls with domineering fathers find comfort in each other.

If you’re a Twilight hater looking for me to bash R-Pattz, I’m afraid I’ll have to disappoint you. Pattinson is actually the biggest mitigating factor here, in a role that’s squarely in his sweet spot. (Like Christian Bale and Ed Westwick, he’s one of those British actors who are best at playing the wealthy, East Coast, prep-school-educated variety of American.) Allowed to loosen up and crack a smile every so often, he displays an engaging slacker charm in both the romantic scenes and especially the ones in which Tyler acts as parent to his 12-year-old sister (Ruby Jerins). In the not infrequent parts of the movie that require him to look brooding or aggrieved, he looks damn fine doing it. So there’s that, too.

Shame that he’s fighting a losing battle. (Warning: minor spoiler ahead.) Director Allen Coulter (Hollywoodland) imparts more grit to this thing than you usually see in Hollywood romances. Had the filmmakers stuck with the romance, this movie might have turned out all right, even with the cutesy conversations and the actively annoying best friend character (Tate Ellington). However, the plot turns out to hinge on the 9/11 terrorist attacks. There’s nothing wrong with using the real-life bombings as a major plot point in a work of fiction, but screenwriter Will Fetters deliberately inserts numerous false leads to fool us into thinking that the story takes place at some point in 2001 where the attacks aren’t a factor. The movie’s trying for an air of inexorable romantic tragedy, but in doing so it makes an unforgivably cheap move. Less ambitious moviemakers wouldn’t have taken such a risk and probably would have made this into pap. Coulter and Fetters do take the risk, and they pay the price in the foul aftertaste that Remember Me leaves. l