Freedom of speech isn’t always free, or so deemed the Texas Ethics Commission after Billy Mitchell ran large ads in several newspapers, including Fort Worth Weekly. The ads blasted the abuse of eminent domain laws and slammed Gov. Rick Perry’s spending habits and diva-like perquisites exercised at taxpayers’ expense. The ad also poked fun at Perry’s “beautiful hair” and succinctly if crudely described the state’s most visible leader as “completely full of crap.”

Mitchell spent $2,791 in February to place ads in the Weekly, the Weatherford Democrat, and The Community News in Aledo. One of the papers — he couldn’t recall if it was the one in Aledo or Weatherford — asked him to add a line at the bottom saying, “Political Ad Paid For by Billy Mitchell of Aledo.” He complied and left the attribution in all the ads. 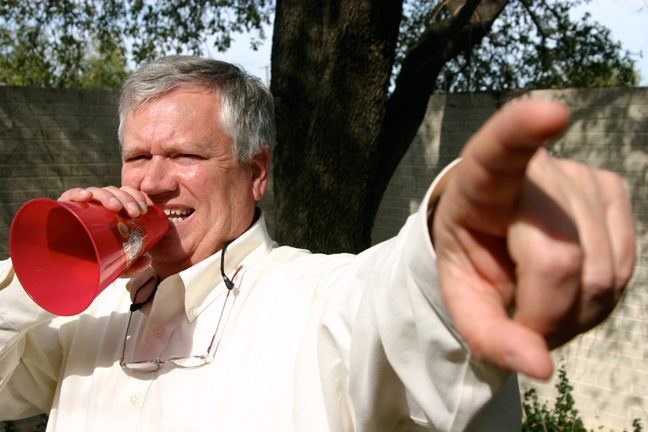 Mitchell also included his web address and phone number, and within days of the ads appearing he’d received about 2,000 web hits and 100 phone calls, almost all of them supportive, he said. One caller, however, told him that spending money on political ads triggered a requirement for paperwork to be filed with the Texas Ethics Commission.

“I wasn’t aware you had to fill out a form to exercise your freedom of speech,” Mitchell said. “It’s not what they taught us at Aledo High School in
government class. They said freedom of speech is unrestricted.”

Mitchell called the agency that was created by a state constitutional amendment in 1991 to enforce election laws and promote public confidence in ethical government. Soon he was talking to an ethics commission attorney, who told Mitchell he should have filled out a political action committee (PAC) form.

No one from the commission would return the Weekly’s calls for this story, but others familiar with campaign spending rules explained what was at stake.

Anyone who spends more than $500 to try to influence the outcome of an election is required to fill out the form, Tarrant County Republican Party Chairwoman Stephanie Klick said. Listing such expenditures allows voters to see where campaign funding comes from. In general, she said, “It gives you some ideas as to any biases or perspectives that the person paying for it might have.” (Klick wasn’t familiar with Mitchell’s situation.)

Even though the commission attorney wasn’t impressed with his argument, Mitchell said that the lawyer was friendly and helpful and instructed him on how to complete the paperwork. Submitting the form was free — but there was a problem. The deadline to submit the form had passed; the ads had already been published. Failing to submit a PAC form in time can result in a $500 fine, plus $100 a day after that, up to $10,000.

On March 3, the commission sent Mitchell a letter saying he owed $1,300 for being eight days late in filing.

If that agency expected Mitchell to sheepishly apologize and write out a check, then they didn’t know what makes this Parker County rancher tick.

Until a few years ago, Mitchell was just a businessman and small-town rancher tending to cattle on 70 acres of land that’s been in his family for more than 40 years. The Trinity River snakes through his pastures, and a 130-year-old farmhouse provides shelter. Then a natural gas company used eminent domain laws to cut a 25-foot swath across the middle of his property to bury a pipeline. Mitchell spent more than $100,000 in legal fees in a two-year battle to protect his land, but the gas company prevailed.

Mitchell, whose travails were reported in the Weekly (“Fighting Back,” Sept. 5, 2007), has been on a mission ever since to reform property laws in Texas, and he sees Perry as Public Enemy No. 1. Perry’s desire for a mega-toll road stretching across Texas would have required rampant use of eminent domain, and the governor raised the ire of many Texans in 2007 when he vetoed a bill intended to provide landowners with more protection.

Standing up for what he believes is Mitchell’s MO. That’s why he fought the gas company instead of taking their initial offer for his land. That’s why he paid for a huge billboard along I-30 with the message: “Eminent Domain — Stealing What Others Work For.” That’s why he bought ads in local newspapers. And that’s why he sent the ethics commission a waiver request last month, telling them he would not pay the $1,300 fine.

“I was not endorsing any candidate,” he wrote to the commission. “I was not coordinated with any candidate’s campaign. I was just expressing my thought using the guaranteed freedom of speech under the First Amendment.” He ended the letter by demanding either a dismissal of the fine or a “trial by a jury of my peers as guaranteed by the Seventh Amendment of the Bill of Rights.”

So far, the ethics commission hasn’t responded to his waiver request. Fort Worth Weekly’s three calls to the agency’s spokesperson went unreturned.

Mitchell’s ads sparked a lively discussion in the Weekly newsroom. Some reporters had no objection to the material since they were clearly identified as paid advertisements. Others staffers didn’t feel comfortable running ads written by angry people with axes to grind.

Controversy surrounding ads is nothing new, particularly at Fort Worth Weekly, whose back pages are routinely filled with ads for sexually oriented businesses.

With newspapers in many cities struggling to stay afloat these days, thanks to the recession and to other pressures like the influence of the internet, some believe that such dilemmas over provocative ads may become more commonplace.

University of Wisconsin-Madison officials found themselves on the hot seat last month after the campus newspaper ran an ad that denied the Holocaust. The paper’s editor defended the ad, calling it a free speech issue, but two of the school’s ethics professors said the ad should have been squelched.

John Tisdale, associate director of Texas Christian University’s Schieffer School of Journalism, was a campus newspaper advisor at Baylor University in the late 1980s and early 1990s and recalls a similar Holocaust ad being pitched back then. The paper refused to print it.

“Does free speech trump absurdity and rational conclusions?” he said. “At some point your staff or the owners have to decide what happens to your credibility as an institution when you allow somebody to buy an ad that makes preposterous claims.”

Tisdale didn’t have a problem with Mitchell’s ad — political ads are more “free and open,” he said.

Weekly publisher Lee Newquist said he wouldn’t have printed the Holocaust ad because it’s such a sweeping claim about a sensitive subject. “That’s controversial for controversy’s sake, and there’s no real merit to it,” he said.

Although the Weekly’s risqué ads offend some readers, Newquist said he has refused ads over the years for being overly explicit. “They don’t see the ones I stop,” he said.

But the publisher didn’t have a problem with Mitchell’s anti-Perry rap. He said he didn’t see anything offensive or blatantly inaccurate. And it was clearly marked as a paid political ad. “I didn’t think that one was over the top,” he said.

Mitchell thought it was fine too. But he might not win this fight.