Cooper’s Old Time Pit Bar-B-Que is all about the meat. For real. Located near Billy Bob’s Texas, the recently opened restaurant, with 26,000 square feet, is almost — almost — as massive as the World’s Largest Honky Tonk®. As at the original Cooper’s, opened in 1953 in Llano, the service in the Stockyards, the restaurant’s second location, is cafeteria style and encourages, well, piggin’ out. 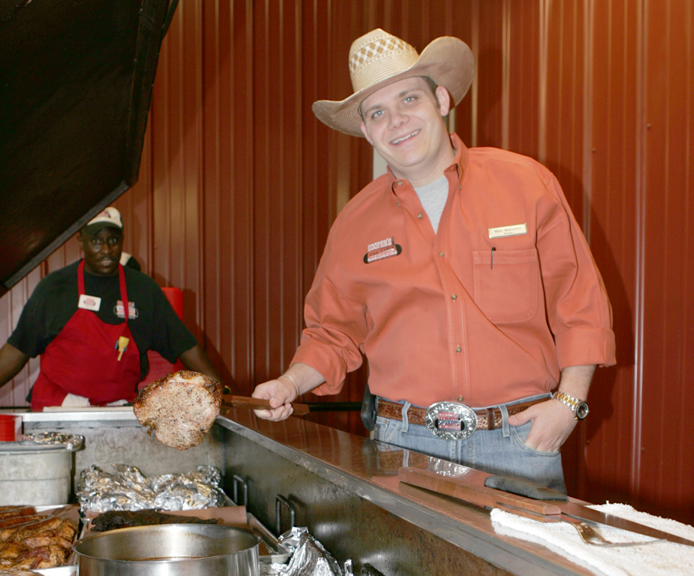 When you walk in, you’re greeted with a market-style serving line that affords you a view of two giant smokers covered in meat — the aroma will have you salivating. You order directly from the pit, and your selection is taken around the corner to a weigh station for pricing and wrapping (in old-fashioned butcher paper, natch). The meat is sold at fractions of a pound down to an eighth.

Cooper’s isn’t much on sides. Other than the requisite dressings of freshly cut onions, dill pickles, jalapeños, white bread, and sauce, the only cooked sides offered are beans and baked potatoes. And desserts are served in individual slices in Styrofoam boxes.

The highlight of Cooper’s menu is the pork, both the loin and the ginormous chop. Impeccably smoked, the standard-cut chop (right at a pound) was over an inch thick and packed with salty-smoky flavor. The loin was sliced a little thinner and was particularly awesome when used as the filling for a white-bread sandwich with a little sauce and slices of onion.

The brisket was tender, succulent, and had just the right amount of fat (not too much, not too little). The spicy and regular sausages were equally savory — juicy, steaming, and melt-in-your-mouth. The chopped beef was rich and dense and probably second only to that from The Ultimate BBQ in Crowley.

The beef and pork ribs were also outstanding. Huge, smoky, a little fatty, and lick-the-bone good, they displayed the requisite smoke rings.

The only letdown wasn’t really major. The cabrito was tough, chewy, and tasted not unlike warm jerky. For the real beef deal, Cooper’s now offers its own brand of jerky at the checkout stand — previously, the stuff was available only at the dry goods store inside Billy Bob’s.

At Cooper’s, the sauce is clearly meant to complement the meat rather than wow diners. Light, vinegar-based, and thin, it nonetheless got the job done.

As a spot for informal chowing down, Cooper’s rocks. One warning, though: With its cafeteria-style service and massive portions, it definitely isn’t a place for a first date –– unless your first date is with Big Tex.