Over the last 15 years, playwright Martin McDonagh — born in England to Irish parents — has pioneered a one-man theater of cruelty. His most famous plays feature desperate, amoral people languishing in contemporary Ireland who commit sadistic acts when their perverse sense of honor is violated.

Shows like The Beauty Queen of Leenane, A Skull in Connemara, and his best work so far, 2003’s extraordinary The Pillowman, are fired by the seemingly limitless possibilities of barbarism. McDonagh fans are a little like some NASCAR spectators: hooked on high-speed spectacle and waiting for the next gruesome smashup. 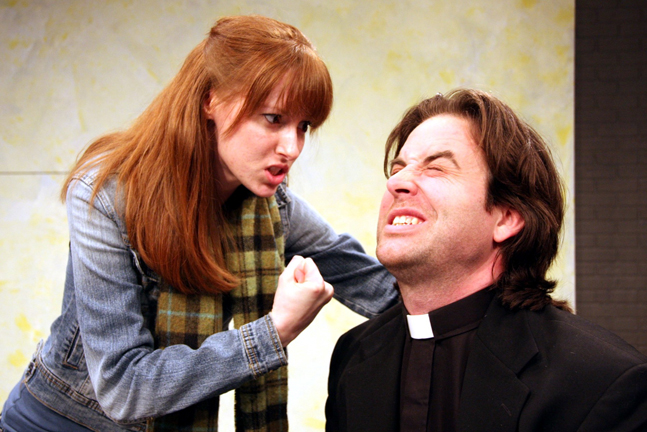 The Lonesome West, currently being produced at Stage West, is the epitome of a McDonagh script: Rivers of profanity flow, guns and knives are drawn at the slightest provocation, and a variety of gleeful (offstage) punishments is administered, including a pencil pushed to the back of a throat and a pair of canine ears brutally removed. Director Jim Covault has opted to apply a more deliberate, almost reflective pace to the script’s bloody recriminations, perhaps in an effort to turn the piece into a kind of drawing-room comedy of very bad manners. (The marquee outside “the Ol’ Vic,” Stage West’s home, pointedly declares that The Lonesome West is “an Irish comedy.”) When all of the fast talking and animal urgency are siphoned from McDonagh’s characters, though, they turn out to be a lot less compelling.

This staging is too exquisitely cast to be called a flop –– it features the highly accomplished trio of Trey Walpole, Jakie Cabe, and Justin Flowers, after all. But during the first act especially, the performers play their nefarious characters with an air of calmness, even formality, that deflates their inevitably absurd and psychotic actions.

The centerpiece of Covault’s set design neatly reveals the characters’ priorities with one telling juxtaposition on the back wall of the stage: Above a mantel full of delicate figurines of saints hangs a rifle; above that, a crucifix. In this living room of a house shared by two grown brothers, faith is decorative while violence is always within easy reach on the gun rack. Coleman (Walpole) and Valene (Cabe) have been locked in a cycle of petty vengeance their entire lives. When the play opens, the two men have just returned from the funeral of their father –– who was accidentally shot by Coleman, or so the official explanation goes –– and are joined by idealistic young parish priest Father Welsh (Flowers). The younger Valene has managed to inherit his Da’s entire meager estate and won’t stop dangling it over the head of Coleman, whose sole passion seems to be the poteen (that is, moonshine) that the pair of them have purchased from a comely, headstrong young high school student named Girleen (Meg Bauman). None of them care enough about Father Welsh to even remember his name correctly –– they call him “Welsh-Walsh-Welsh” –– but they’ve made a sport of teasing the Roman-collared poteen swiller about his constant crises of faith. When Father Welsh makes a rather extreme gesture to save the corroded souls of Coleman and Valene, the brothers are forced to scour their hearts for any traces of the compassion and pity that the young priest believes are buried there. In true McDonagh style, it’s not a fruitful search.

If Stage West’s The Lonesome West is hampered by a curious politeness, the actors manage to glean one sharply observed, poignant moment after another from the subdued pace. As the viper-tongued teenage poteen peddler Girleen, Bauman more than holds her own against the predatory older men around her; her monologue on the strange inspiration of graveyards is gorgeously delivered. Flowers believably renders a seldom-seen character type –– the doormat priest with self-esteem issues –– and, despite the comic mileage he gets from his spiritual impotency, maneuvers Father Welsh’s rather abrupt tragic turn with quiet grace.

And then there’s Walpole as Coleman and Cabe as Valene, bloodthirsty adolescent rivals stewing in the bodies of middle-aged alcoholic men. I’m not sure if, or how often, Walpole and Cabe have worked together before, but they trade barbs and blows with the seasoned chemistry of a comedy team. Their smallest reactions to each other –– the tilt of a head or the pointing of a finger –– carry loads of fraternal meaning. But for all that investment by the actors, very little is shocking or wild or even unpredictable about these brothers in Stage West’s domesticated production. There’s charm in abundance but only an echo of the savagery that made McDonagh famous. The playwright has been accused of a lot of things by outraged audiences, but being civilized isn’t one of them.