I’d resigned myself to the fact that nobody around the Metromess plays real, unhyphenated rock ’n’ roll anymore — you know, that blues-based music with a backbeat Chuck Berry said you can’t lose? 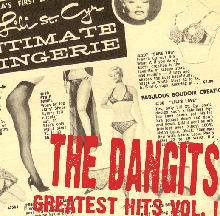 Then, last year, The Dangits appeared like a bolt from the blue, kicking out the jams with a feral intensity you could only match  by getting in the time machine and going back to ’90s Scandinavia (stomping ground of the Hellacopters and Gluecifer) or ’70s Australia (where the Saints and Rose Tattoo made their mark).

At the end of 2009, The Dangits entered the studio to make their debut recordings, which they’ve modestly entitled Greatest Hits Vol. 1. Over a dozen songs that blast by in 25 manic minutes, fireplug frontman Mike Noyes roars with mic-eating intensity while splitting lead-rhythm duties with lanky ax-slinger Branden Smith. Drummer Mark Baker and bassist Paul Blank provide the solidest of foundations. Baker had been in the band only a few weeks at the time of the sessions. However, he and Noyes previously played together in Speedealer, and his flashy tub-thumping fits the band like the proverbial hand in glove.

The titles tell the tale: “Wasted,” “Gotta Get Some Action” (not a Hellacopters cover), “Rock Is Dead,” “Get Up & Go.” These guys glory in the muscular tones of Gibson guitars and Marshall amps, and their lyrics celebrate a life of speed and wild abandon. Join them and be righteously rawked.