I don’t have children. If I did, I’d probably see many movies differently. Take Babies, for instance. This documentary has drawn plenty of oohs and awws from festival audiences, publicity screenings, and the like. Since I’m not the sort of person who looks up videos of cute animals on YouTube or goes all gooey over the miracle of life, the movie left me pretty much unmoved. Which isn’t to say I didn’t enjoy it — I just hope that the filmmakers don’t make their next movie about kittens. 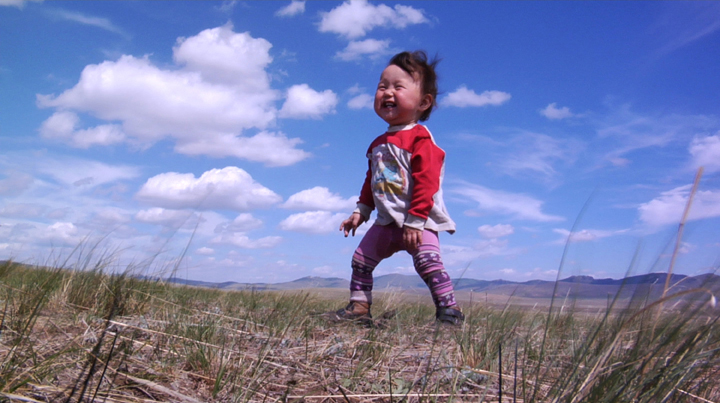 French documentarian Thomas Balmès follows four subjects during their first year or so of life: Ponijao, a boy born to a desert-dwelling tribe in northwestern Namibia; Bayarjargal, a boy of the Mongolian steppes; Mari, a girl from Tokyo; and Hattie, a girl from San Francisco. It’s odd that the two girls are in urban environments while the boys are in thinly populated rural areas, but with a sample size this small, there are likely to be patterns that the filmmakers didn’t intend.

Balmès treats this as a nature documentary, taking his lead from other minimalist French docs like Claude Nuridsany and Marie Pérennou’s Microcosmos and Jacques Perrin’s Winged Migration. (The best comparison is March of the Penguins, another movie that takes a cute subject matter and treats it with highbrow seriousness to try to convince us that we’re watching something deep.) There are no interviews and no voiceover narration, and what conversation we hear from the parents and others around them goes untranslated. We’re left to our own devices when it comes to understanding what we’re seeing, especially with the cultures in the developing countries. When a meeting of Mongolian adults breaks into guttural singing, we’re as confused as Bayar — is this a religious service or a music appreciation group? You may well spend much of this movie asking where the parents are, because the filmmaker never clues us in as to whether they’re watching from just outside the frame or are someplace else entirely. This is especially true when Ponijao starts eating things a baby shouldn’t eat or when Bayar (naked from the waist down) comes perilously close to castrating himself while climbing down from a metal drum.

Instead, the movie focuses entirely on the babies, their moods, their developing understanding of the world around them, their attempts to stand up and walk. They all interact with animals; Ponijao plays with several large dogs protecting his village, while the other three live with cats. One of the funniest things we see is Bayar being bathed in a basin when the family goat leans in through the window and starts drinking the bathwater.

The film has no shortage of such awww-worthy moments; indeed, some would say that that’s pretty much all it has. Hattie’s dad takes her to a New Age-y class where parents and their infants sit around singing “The Earth is Our Mother,” and Hattie decides she’d rather be somewhere else. (I’m with her on that.) Meanwhile, Mari throws a tantrum when she can’t figure out how one of her toys is supposed to work. Along with all that, we can appreciate the movie’s breathtaking visuals, like the stunning view of Tokyo from Mari’s apartment or the sight of Bayar crawling on a rolling, green plain with the clouds overhead throwing shadows on the landscape. This movie also thankfully doesn’t offer up an idealized portrait of innocent childhood; Bayar’s older brother seems to take particular delight in making the baby cry by waving things in his face.

Still, it’s hard to discern exactly what this movie is supposed to be about. Balmès’ globetrotting approach would seem to lend itself to teaching us about different methods and outlooks on child-rearing, but he doesn’t give us any context, and contrary to what he might think, the material doesn’t speak for itself. We don’t learn anything about childhood, human nature, city and country living, birthing rituals, or anything else that the movie might have commented on meaningfully. What might have been a valuable piece of anthropological work instead becomes “See the baby smile! See the baby poop! Isn’t that adorable?” Much as I hate to say it, you’d learn more about this subject from watching The Back-Up Plan.

I guess the lesson here is that when a filmmaker goes all in for minimalism, sometimes he leaves out too much. All Babies gives us is a bunch of infants to coo over, and if that’s enough to get you to the movie theater, fine. Just as long as we’re not pretending that this documentary offers anything more than that. Me, I left this movie feeling like I’d just spent an hour and a half looking at somebody else’s baby pictures.