Writer-director Raymond De Felitta made an excellent movie in 2000 called Two Family House, a drama that drew heavily on his early life and his memories of his dad. Since then he’s made only three films, including this one and the weepy 2004 Paul Reiser vehicle The Thing About My Folks. The fact that his autobiographical work has been so much better than his other stuff doesn’t bode well for his future. Then again, one near-great movie is one more than most filmmakers get to make. 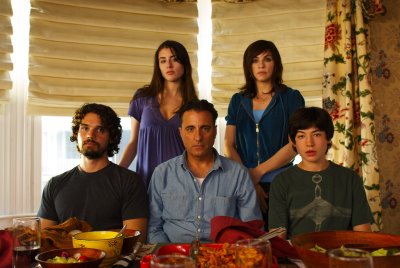 The main character of his current movie, City Island, is Vince Rizzo (Andy Garcia), a third-generation resident of the one-square-mile fishing village in the Bronx that gives the movie its title. Vince’s marriage has turned toxic, and his wife Joyce (Julianna Margulies) comes to suspect that he’s meeting another woman during his twice-weekly “poker night.” In fact, he’s at an acting class, trying to fulfill ambitions that haven’t been satisfied by his longstanding job as a corrections officer — he bristles at being called a prison guard. He wants to become a working actor, but he’s too afraid to take the plunge until he receives encouragement from a fellow student (Emily Mortimer).

This is enough of a plot to hang a movie on, but unfortunately, De Felitta doesn’t seem to think this is enough, so he saddles us with a bunch of other story lines. Vince discovers Tony (Steven Strait), the 24-year-old son whom he’s never met, in one of his cells and takes him in temporarily after Tony is paroled, without telling the young man about their past. None of the other Rizzos know about their relationship either, but then they’re all busy hiding secrets of their own: Daughter Vivian (played by Garcia’s real-life daughter, Dominik García-Lorido) is working at a strip club to pay her way through college, while teenage son Vince Jr. (Ezra Miller) is surfing porn websites that feature fat women, one of whom turns out to be the Rizzos’ 300-pound neighbor (Carrie Baker Reynolds). Oh, and Vince and Joyce are both closet cigarette smokers.

All this leads to some amusing business when Joyce starts lusting after Tony and his sculpted abs — Margulies’ otherwise one-note performance turns funny and sexy in these scenes. That, however, doesn’t make up for the shrill family bickering and the train wreck of a climactic scene when everybody’s secrets spill out. It’s supposed to be chaotically funny, but instead it’s just embarrassing. City Island is so much stronger when it focuses on Vince’s travails as a neophyte actor, particularly in a terrific scene during Vince’s first professional audition, which takes a surprising turn after a disastrous start. Material like this is worth salvaging, and it suggests that De Felitta could use a collaborator to help him separate his best ideas from his worst ones. l