Sunsets of orange and violet, freedom from the visual clutter of skyscrapers and highway overpasses, pecan pie at the Lord’s Acre in the fall, Indian paintbrushes in the spring — the area just south of Fort Worth is a perfect place to raise a family, retire, or get away from it all. People move to places like Joshua and Burleson to revel in such simple pleasures. No wonder the punks in Rotundus couldn’t wait to escape.

Both towns are just a short drive away from civilization, but to hear Coleman Driver, Rotundus’ 22-year-old lead vocalist, describe growing up in the area, they seem like little more than one big pool of truck stops and churches in the middle of the desert. 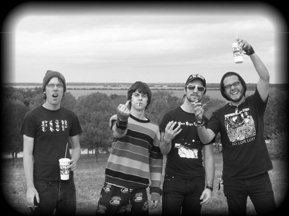 “People always stare at me like I’m going to murder them when I walk through Wal-Mart,” Driver said. One look at him and bassist Colt Hudgens, and you can see why. With their black clothes and skin-tight ripped jeans, the two don’t come across as lads on their way to Bible study.

The two also were separated from most of their neighbors by class lines. A lot of folks drove Vipers, and most of the local kids cruised around in brand-new trucks and SUVs. Dirt-poor punks were a rare sight, which explains Driver’s and Hudgens’ tight bond. The survival instinct also drew them together. They were often attacked –– verbally and physically –– by the clean-cut masses.

Driver’s and Hudgens’ connection was sealed by a shared passion for d-beat music, a punk sub-genre named after British band Discharge’s distinctive machine-gun drumbeat. The duo enlisted Burleson’s K.C. Long on drums and Alex Childs on guitar and became official last July. Rotundus’ first show was in August, and it was a huge one, opening for Unit 21 at The Alamo before the veteran crust-punks from Fort Worth embarked on their recent Japanese tour.

By early September, Rotundus was ready to record its debut release, the six-song cassette Ferocious Ambush. With no set schedule, the band laid down tracks over the course of three weeks — pretty much whenever the guys had spare time and some extra cash. Having taught himself how to record while demo’ing material for an earlier band, Driver manned the boards while the rest of the band made his bedroom the loudest in South Fort Worth. Judging from songs like the title track and “True Colors,” Rotundus certainly captured those sessions’ primal urgency.

The entire cassette foams at the mouth with perverse, lo-fi degradation, ensnaring the raw, unpredictable energy of a live show, a characteristic no doubt aided by Driver’s DIY set-up. He employed only a MacBook, GarageBand software, and a cheap microphone with a direct-input into his USB slot. The sonic attack is ambitious. Finger-tapping guitar solos charge with rock ’n’ roll fury into tortured, incomprehensible howls. Hudgens’ bass tone is scorched, debased. It challenges Long’s ear-popping, violent snare fills at every turn.

Copies of Ferocious Ambush are available for sale online and will be available at shows. The album, according to Driver and Hudgens, is a fair representation of the Rotundus sound, but it’s only the beginning. “I just want to play as many shows as possible,” Driver said. “If we can just introduce people to punk or d-beat, I’ll be happy.”