When the Super Bowl is played in Arlington next year and Dallas Cowboys running back Felix Jones is racing down the field to score the winning touchdown, the announcer will yell, “He’s at the 40…the 30…the 20…the 10…TOUCHDOWN! The Cowboys win! The Cowboys win!”

Those yardage lines will be marked by chalk.

Chalk is used for many things. Seamstresses mark patterns with it. Children play hopscotch. Teachers use it in schools to learn us good.

But that doesn’t mean people in Glen Rose and surrounding areas won’t fight tooth and nail to protect their beloved Chalk Mountain from being blasted and quarried.

The Chalk Mountain Foundation, featured in a Fort Worth Weekly cover story (“Grinding Up Chalk Mountain,” Oct.29, 2008), knows there is strength in numbers. They’re looking for volunteers to head to Austin in the near future to protest a rock crushing permit application at a Texas Commission on Environmental Quality (TCEQ) commissioners meeting.

“I received a call from the TCEQ’s office of public assistance…as to how many people would want to attend the meeting in case they needed to get a larger room, or if they needed to attend to any special access requirements for attendees and so forth,” foundation member Darrell Best said. “I asked when the permit application was going to be placed on the agenda and the person did not know, all they were asking about was ‘crowd size.’ It is clear they understand that this is a hot topic in Somervell County.”

If you’re interested in preserving Chalk Mountain and making a trip to Austin, let Best know.

“The decision at this meeting is to either approve the permit, deny the permit, or move the permit to the State Office of Administrative Hearings,” he said. “The commissioners need to see that this issue is of interest to the entire community, not a narrow group of affected landowners. Obviously it is hard to commit without knowing a date, what I need however is an indication whether there is interest in attending given the date works into your schedule.” 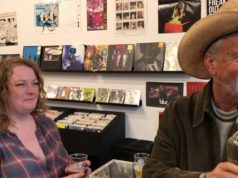