This CD-R came with a note from its creator, one Jonathan O’Connor, which read, “Chris Hardee said I should mail you one of these. I was also a fan of PFFFFT! and thought you might like this.” Right away, my bullshit filter was activated, because I know that no one was a fan of PFFFFT! But Chris Hardee, once and future leader of Alan: The UniversAL ANswer is Both — and also one of O’Connor’s JoCo co-conspirators — is an honorable man, so I gave the disc a spin. 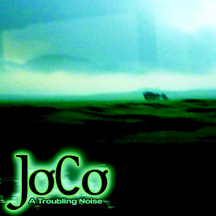 Wouldn’t you know it, JoCo actually is cut from the same cloth as PFFFFT!, the defunct improv outfit with which this writer played in 2008. But while that band was an ongoing battle for dominance between Clay Stinnett’s propulsive momentum and Matt Hembree’s melodic imagination (with Tony Chapman and your humble chronicler o’ events clinging on for dear life), JoCo’s racket is an amorphous mass of synth noise, shimmering keyboard washes, feedback over the drone of F/X-laden guitars, and found sounds (fine in moderation, obtrusive when overused as they are on “The Ghosts in This Room Will Not Let Us Sleep”).

Tempos tend toward the lugubrious, and melodic development is minimal. Somehow, though, JoCo manages to combine ethereal bleep with primal thump in a way that’s strangely compelling. Perfect soundtrack music for a movie about disaffected teens building a rocket ship from yard-sale castoffs in somebody’s garage, using old Pink Floyd records for fuel. Set the controls for the heart of your mom.