If I heard it once this week, I heard it a dozen times: “So, didja go to The Where House party?” In case you missed last week’s HearSay column, I’m referring to a party on Saturday night at The Where House on Hemphill Street. It featured excellent bands (The Orbans, Chatterton, RTB2), free booze (compliments of Buffalo Trace Saloon bourbon), and a late-night DJ set. 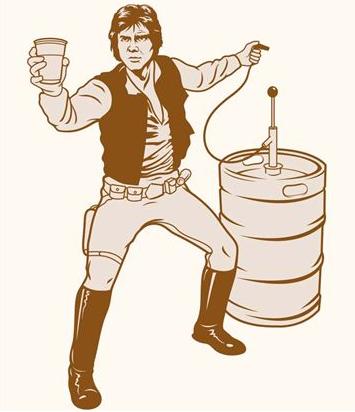 The answers I’ve heard range from “kinda lame” to “IT WAS THE MOST FUN I’VE EVER HAD!” Of course, the varying reactions probably depend on whether the person asked had been the designated driver or person who had a total blast right up until he puked in said designated driver’s purse. (When asked about the show, a music lover might narrow his eyes in rueful annoyance –– apparently, the sound system was problematic.)

In my case, the answer was no, I was here on West Berry, stuck at work. And you might not think that watching a closed-captioned Empire Strikes Back on Spike on a bar TV on a slow night could compare with the alleged party of the century –– but, really, it kinda did.

At The Moon, where I work, we had a rad Fort Worth band called The Dirty Dandies, who sounded like a rootsier version of The Faces or a sweeter version of The Animals, and they drew a decent crowd, albeit a crowd composed of a lot of kids with Xs on their hands. So while the show was good, I didn’t end up serving much alcohol.

I expected it to be slow, though. While I couldn’t go to The Where House, most of our regulars evidently did. (I’m assuming.) Anyway, slower nights afford me the chance to take lots of breaks.

During one of those breaks, I wandered next door to The Aardvark, on the advice of a text from Aardvark soundguy Derek MacDonald. Now normally, a text from a neighboring club employee on a slow night means that something either laughably awful or totally awesome is about to happen, and it pays to dry your hands and stick your head out the door. As I neared the club, I heard the ponk and thud of hand percussion and dual wailing on classical guitars.

Spread across the stage was a six-piece Austin band called Del Castillo. If you connect the bit about the hand-drums above and the name of this band, you will correctly assume that it was a super-tight Latin band made up of guys who look like they’ve been killed in a Robert Rodriguez movie. Their sound was big, and their crowd was huge! OK, well, that’s an exaggeration, but The Aardvark is big, and it was half-full, which is still a pretty good draw. I watched them until the bass player started introducing the band. I don’t know about you, but I hate when bands introduce the players. Intros make me feel like I’m watching a collection of hired guns rather than a band-band, as if the Wild Bunch carried Telecasters instead of Colts. And at that point, I start to wonder which guy in the band is the Ernest Borgnine character.

Anyway, what interested me about what I’d seen and who I hadn’t that night was how scenesters shift from one locale to another, sweeping around town like flocks of grackles. As I ambled back to my bar, I wondered where Del Castillo’s crowd normally hung out and if that place was empty tonight too.

On the TV, Lando Calrissian was laying his galactic hustle on Princess Leia. On the floor, the bands had been paid, and the kids had left, so we started to break down the bar a little early; with only a handful of people to serve, we didn’t really need all that ice. Except when we did. At about 1:30 a.m., 10 TCU kids came for the last hole of a night of bar golf. We made double whiskey-Cokes and cracked open Miller Lights. The kids traded Empire quotes. Last call ran a little late, but they paid their tabs and hit the road by 2. The stormtroopers put Captain Solo in the cargo hold, and we finished cleaning up. At The Where House party, this was probably around the time the DJ quit moving mp3s around his iMac or whatever, but who knows. From what I heard, I guess I really missed it, but I’m not too bent out of shape. I had a pretty good Saturday all the same. –– Steve Steward