About two-thirds of the way through Get Him to the Greek, it all clicked for me. In the middle of a scene at a Las Vegas strip club that involves gunplay, martial arts, a large dildo, a raging fire, and a guy being shot up with adrenaline, I realized: This movie is a wilder, funnier, more anarchic version of The Hangover. It’s The Hangover on mood-altering drugs. That’s why I was relatively reserved in my praise for that movie that came out one year ago this weekend. Even though it was very funny, I knew it could be done in an even crazier fashion. Hello, here it is. 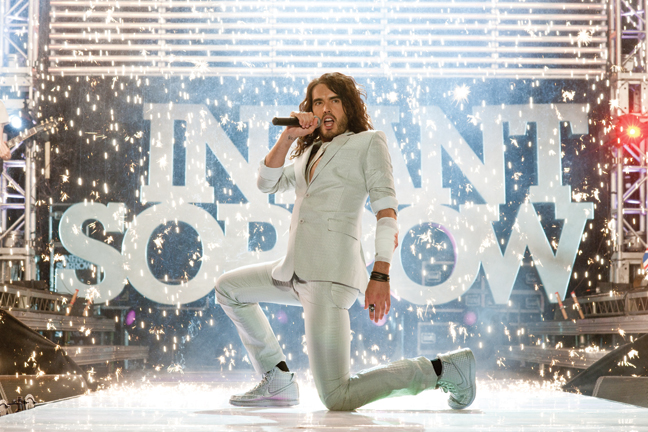 The movie stars Jonah Hill as Aaron Green, a music-label flack who comes up with a killer idea during a corporate brainstorming session: a concert to commemorate the 10th anniversary of a legendary live performance at L.A.’s Greek Theatre by bad-boy British rock star Aldous Snow (Russell Brand) and his band, Infant Sorrow. Record label president Sergio (Sean Combs) gives Aaron his assignment: He has 24 hours to transport Aldous from London to New York for an appearance on The Today Show and another 48 to get him from there to L.A. for the concert at the Greek. The catch is that, as badly as Aldous needs a new hit record, he’s in worse need of straightening out, having relapsed into drugs and booze after breaking up with his wife, a vacuous pop star named Jackie Q (Rose Byrne). Aldous’ hard-partying ways threaten to sidetrack the whole operation.

If Aldous and Infant Sorrow sound familiar, that’s because they were characters in Nicholas Stoller’s 2008 comedy Forgetting Sarah Marshall. Stoller is the director here as well, and he’s taken over writing duties from Jason Segel. Strangely, Hill acted in Forgetting Sarah Marshall but played an entirely different role. Even stranger, Aldous doesn’t notice the resemblance, though perhaps he’s too blasted to see it. Hill is cast effectively against type as the straight guy reacting to the madness around him, and pairing him with the irrepressible Brand proves to be an inspired match. It results in situations like Aaron trying to keep Aldous sober for his TV appearance by consuming all the liquor and weed in the limo himself on the drive to the set. The movie’s chock-full of memorable verbal riffs, too, like Aldous explaining why the hand-rolled cigarette he carries around is called a “Geoffrey.” The Geoffrey causes hallucinations and heart palpitations in one character, who tries to calm himself by stroking the weird hairlike décor on the strip club’s walls. (“This is wonderful! I want to cover the outside of my house with this! My house will look like a werewolf!”)

In addition to being the movie’s chief cut-up, Brand also gets many chances to show off his musical chops, with original songs written by him, Segel, Jarvis Cocker, and others. I wish Infant Sorrow’s songs — and Jackie Q’s, for that matter — didn’t all involve an obvious sexual double entendre, though “The Clap” is an agreeable hard-rocking number with a handclap-accompanied refrain of “We’ve got the clap!” The only song that doesn’t go in for the entendres is the one we see at the very beginning, “African Child,” a terrific send-up of clueless celebrity activism.

Maybe the most miraculous thing about this movie is its supporting cast. Maybe this is a case of good material lifting all boats, but lots of people with no track record of being funny get to be hilarious here. Given the role of a crotch-baring pop star, Byrne finally finds a way to cut loose, and it’s gratifying to see. Combs is directly involved in some of the movie’s best bits, like an early scene when Sergio counsels Aaron about the importance of “mindfucking” the artists. (A dead-serious Sergio: “I’m mindfucking you right now. Can you feel my dick in your mind?” Aaron volleys back, “I hope you’re wearing a condom, ’cause I’ve got a dirty mind.” Sergio is unamused.) Not only does this movie give celebrity cameos to both Metallica drummer Lars Ulrich and Nobel Prize-winning economist Paul Krugman, it also squeezes laughs out of both of them, with Ulrich and Aldous exchanging zingers while the former is in bed with Jackie Q.

Another unexpected source of laughs is Elisabeth Moss, spacing out to good effect as Aaron’s often sleep-deprived girlfriend. This role feels like a standard girlfriend part until the end, when she discovers Aaron’s infidelity and picks an unorthodox method of retaliation. Just as Sarah Marshall did, Get Him to the Greek culminates in a sex scene that reveals character and moves the plot forward: no small accomplishment. That’s the other way this movie improves on The Hangover — these characters, ridiculous as they often are, have more depth. Aldous’ search for something to live for besides mass adulation and illegal substances gives the movie particular traction without sacrificing the humor. That helps make Get Him to the Greek the funniest movie so far this year, and it makes me feel like a hit of the Geoffrey myself. l