expectation ek-spek-tay’-shun noun. A strong belief that something will happen or be the case in the future : Reality had not lived up to expectation.

It has been my experience in life that my greatest joys, sadnesses, disappointments, and delights all centered around expectations, both my own and those of others. Certainly that was the case four years ago when I went to Iraq on an assignment for Fort Worth Weekly. 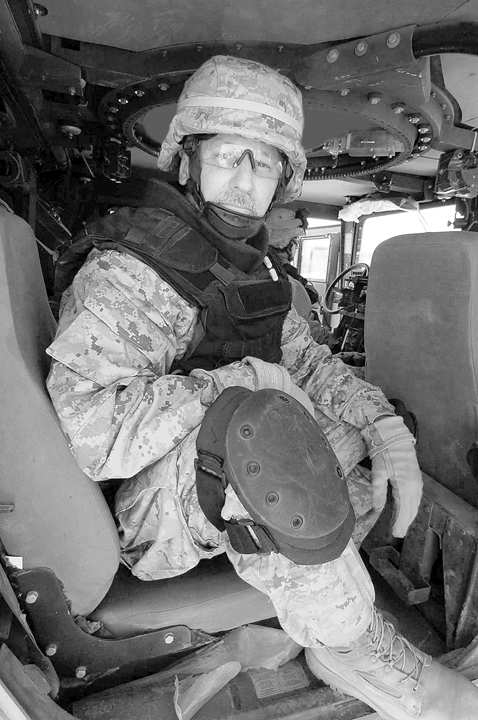 I had great expectations about what I’d experience and the kind of story and photographs I’d produce. After all, this wasn’t my first war. As a former Marine, I’d served as an infantryman in the early1970s.

In Iraq, the professionalism of the young men and women who served there was exactly what I expected. So were the blogging, the laptops and DVD players, impromptu dance and singing contests, home-video cameras, and people finding fun, happiness, and even love amid the war and fighting.

I also expected to see the full military might of the United States on display, air strikes and firefights with men and machines dealing death and destruction to America’s enemies. Those expectations weren’t fulfilled.

This didn’t sadden me — it just made finding and reporting the story more difficult but ultimately more satisfying. In place of military might were young men pitting themselves not against a visible enemy but against luck and fate. There were no air strikes or big firefights. The armaments arrayed against us were always hidden beneath our path. We patrolled the same stretch of road every day in vehicles, knowing that the bombs were there but never seeing the people who placed them. The enemy was the IED. Sometimes the same Marines were assaulted by those improvised explosive devices several times in one day.

And so I should have expected to see some of those young Marines around me getting killed and wounded. And I did see that — not that I was really prepared for it.

What I did not expect were the deaths of two young Marines and an interpreter within the first hour of my embed. What I did not expect was that the driver of the Humvee and I would be the only survivors of the IED explosion, out of the five people initially on board. What I didn’t expect was the death of my public affairs contact, Major Megan McClung, a few weeks shy of her planned return to the States, five months after I had returned safely home.

What I didn’t expect was how deeply all of that would affect me or that I would stay in contact with several of the Marines and their families long after I returned home.

Now I’m going to war again, and this will be the last time. I have gotten too old, too fat, and too slow to do it anymore. This time the battlefield will be in the mountains of eastern Afghanistan. No more 125-degree days in Iraq — this time it’s mild temperatures with a lot of elevation. I may be wishing for the blistering heat instead of the elevation two months from now.

And my expectations this time? I expect there will be a tremendous amount of fighting. I expect to see the same kind of determined and incredibly professional young men and women I saw in Iraq. I expect I’ll find out how it feels to be involved, tangentially at least, in the longest war ever fought by the United States. I expect that I will be driven to excellence in reporting and writing again once I return (drill instructors ain’t got nothin’ on the editors at the Weekly).

Only time will tell if my expectations were right or wrong. I know there’s going to be a great story in there someplace. But if I witness less drama and trauma than I saw in Iraq, less death, fewer of the experiences that are still painfully memorable, that will be OK with me.

Editor’s note: Writer and photographer Don Jones went to Iraq for the Weekly in 2006. His story about that experience, “Call Sign: Havoc,” can be found here.