Clogged filters, low water pressure, and test results alternately confirming and disproving the presence of harmful chemicals in their private water well have led a DISH family to switch to bottled water for everything from brushing their teeth to cooking.

The problems started around March 2009, about the same time that Oklahoma-based Devon Energy began work on a natural gas well near the home of Damon Smith and his family. Suddenly the Smiths started seeing something extra in their well water, the household’s sole water source. 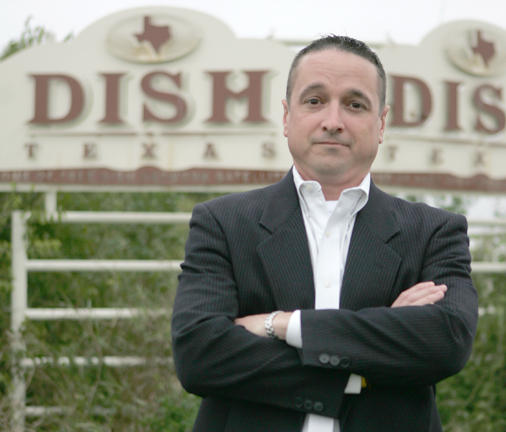 “Around the time Devon put up the well, we started getting sediment in our water,” Smith said. “When it first started happening, I wasn’t really concerned; I thought it would just go away. Then my wife filled the bathtub and showed me this layer of gray sediment in the bottom of the tub.”

Shortly afterward, Smith installed a filter for the well water and began replacing filters approximately every 30 to 45 days as they became caked with the sediment.

However, that routine came to a halt in early May of this year, when the Smiths noticed an abrupt loss of water pressure. The cause was immediately evident: The filter system and pressure tank  were packed with more of the gray sediment. With the help of his father, Smith eventually cleared out more than 10 pounds of the material.

“I was so freaked out by how much sediment I was getting, I immediately called Devon,” he said. But a company spokesman “was very noncommittal about getting involved,” Smith said. “He told me to contact the [Texas] Railroad Commission and if their test results matched the drilling muds Devon used, then they’d make it right.”

Smith did indeed contact the Railroad Commission, which sent an employee from its Wichita Falls office to collect a sample. After the first test detected compounds, including arsenic and barium, at levels in excess of drinking water standards adopted by the Environmental Protection Agency, a second sample was collected in late May.

In an e-mail statement, commission spokeswoman Ramona Nye said that results of the second test showed no compounds in amounts exceeding the EPA’s drinking water standards.

“Based on these differing results,” Nye wrote, “the commission plans to have another sample collected. At this time, commission staff has not reached a conclusion about the source of the compounds.”

The commission may be reserving judgment, but Smith has no doubts that the hydraulic fracturing of the Devon gas well near his home is responsible for the well contamination.

“It’s just the timing of it; it can’t be anything else. We had clear water right up until they started drilling, and then it turns milky,” Smith said. “I’d be willing to pay to have someone come out and check the well, but would Devon reimburse the $4,000 after I proved it wasn’t my well?”

“We haven’t seen any formal results from the commission, so we’re going to wait until they issue a ruling,” he said.

Smith isn’t alone in his conviction that  the contamination is a result of drilling.

Both DISH Mayor Calvin Tillman and Alisa Rich, owner of Wolf Eagle Environmental, a firm retained by Dish to conduct independent testing, said they have no doubt the contamination is connected to gas drilling in the area.

“I’ll agree it’s unusual that Damon’s [is] the only one seeing sediment right now, but I’m positive that if testing were done of more wells, we’d see the same chemicals turn up,” Tillman said.

Rich said the Smiths’ well problem is the worst she’s ever seen. After collecting samples of water and sediment, Rich said she’s convinced the sediment is from drilling mud likely used by the nearby Devon gas well. “With the color and structure of the sediment, there’s no question of what it is,” she said. “We had it analyzed by a lab, and they confirmed it was bentonite mixed with surfactants. It’s not something that would be naturally occurring.”

Wilma Subra, an environmental consultant who helped Smith interpret the Railroad Commission test results, said while there are a few potential sources for the compounds detected, there is no natural explanation for their presence. Only human activity — either gas drilling or past agricultural activities — could account for the presence of that kind of pollution in the well water, she said.

But for Smith, the concern right now isn’t fixing blame so much as it is just getting the situation fixed.

Even moving isn’t a realistic option, he said.

It’s a feeling Tillman can empathize with. The mayor has led the battle to get the state and the energy companies to acknowledge and remedy the environmental damage caused by gas industry activities in and around his town. But he recently announced that he intends to try to sell his home because of his concern for the health of his family. He said the situation in DISH has made it almost impossible for those who bought property there before drilling began to move on even if they wanted to.

“In a sense, I don’t have it as bad as Damon,” Tillman said. “The air in DISH is getting better, and I guess I could always install a whole-house filtration system, but if I sell, a $75,000 loss is probably realistic. Damon’s property is pretty much worthless now. How can you live without water?”

Help may be on the way for Smith and his family, though.

Tillman said the city is exploring options to extend a water line far enough for Smith to be able to tap in to it. However, the city is currently unable to afford to do so on its own and is seeking aid from state and federal agencies.

Both the EPA and the state commission are exploring ways to ensure the safety of the city’s water supply.

Smith is scheduled to meet with an EPA inspector late next week. A spokesperson for that agency declined to comment on the nature of the EPA’s involvement, citing privacy concerns.

In her e-mail statement, Nye also said the commission has ordered operators of gas wells near the Smith home to conduct pressure tests of their well casings by June 14 and requires tests be conducted with RRC inspectors present. Nye declined to comment on the reasons for the order, but drilling-related sources said that could mean the commission is trying to determine whether any well casings in the area are leaking.

As Tillman sees it, issues like DISH’s air quality concerns and the new concerns of the safety of water wells will continue to be a problem until reform comes.

“Essentially the whole system is broken,” Tillman said. “The agencies that should be regulating the industry aren’t. You have thousands of gallons of oil flowing into the gulf, you have air being contaminated, water being contaminated, and agencies like TCEQ [Texas Commission on Environmental Quality] and the Railroad Commission are making themselves more accessible to industry than they are to those they’re supposed to be protecting.”