All right, this is bugging me: Why is this movie entitled The Karate Kid? I understand why the filmmakers would want to keep the title of the 1984 movie that they were remaking, but this new version is set in China and revolves around the Chinese martial-arts discipline of kung fu. The Japanese fighting style of karate is barely mentioned here. So why The Karate Kid?


Would naming the film The Kung Fu Kid have created mass confusion among moviegoers? I’m afraid this can go into the massive file labeled Hollywood Thinks You’re Stupid. Now that I’ve picked that particular nit, I can say that this remake isn’t a great movie, but it’s quite a bit better than you might expect. 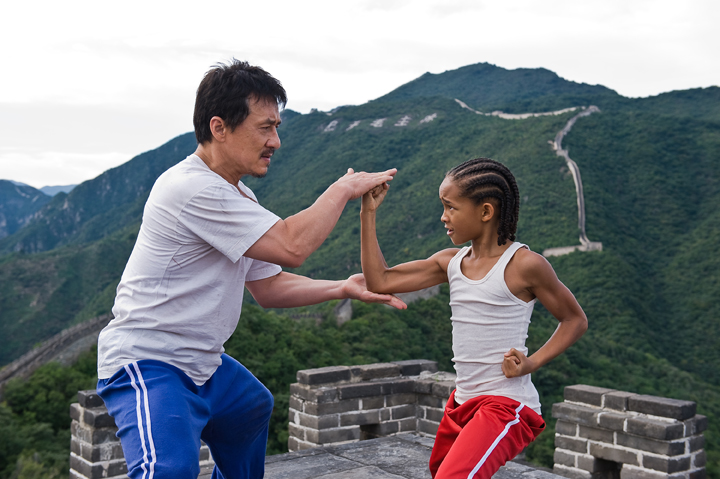 The story is the same, but the names as well as the setting have changed. The original’s Daniel-san becomes Dre Parker (Jaden Smith), a 12-year-old who’s uprooted from Detroit to Beijing when his mom Sherry (Taraji P. Henson) is transferred by her employer. Dre’s actually worse off than Daniel-san because, in addition to being bullied by the local boys, he doesn’t know the language or the customs of this new place. He meets his Miyagi in Mr. Han (Jackie Chan), the maintenance man at his apartment complex who intervenes to save Dre from a beating and later agrees to teach him kung fu to allow Dre to stand up to his tormentors.

This is a Chinese movie as much as it is a Hollywood movie. I don’t mean just that some of the dialogue is in Mandarin (a little less than half, by my rough estimate). I mean that this film evokes a sense of what China is like and engages with the culture. Though the story is boilerplate, we and Dre are constantly reminded of the foreignness of his surroundings, in the Mandarin-dubbed episodes of SpongeBob SquarePants on TV and in the Chinese kids wanting to touch his cornrows, which brings Dre both pleasant and unpleasant attention.

Dutch-born director Harald Zwart (Agent Cody Banks) takes in the setting with a tourist’s awestruck manner, especially during the interludes at the Forbidden City and the Great Wall. Yet he doesn’t forget to show Beijing as a real place with garbage in the streets and cracks in the concrete. Even though Sherry’s job pays well, the Parkers still live in a dingy set of rooms with an obstructed view (in an apartment complex ironically named after Beverly Hills). Movies that depict modern-day Beijing are usually gloomy, socially conscious Chinese-made dramas like Beijing Bicycle or The World. They’re not usually slick pieces of Hollywood entertainment. That explains this movie’s unique feel.

A few years ago I speculated about Jackie Chan’s troubles in finding suitable vehicles as he hit middle age, and I figured he might profitably recede into supporting roles. This movie is something like what I had in mind. Relegated to the background for most of the martial-arts scenes, Chan is free to concentrate on a role that’s darker than usual for him. He knows how to play the character’s laconic nature for comedy, and, more surprisingly, he’s good with the heavier dramatic side, too. Much like Mr. Miyagi, Mr. Han is nursing some private grief, and I wish the film hadn’t revealed it through Mr. Han telling Dre about it. (The original is much more powerful for having Daniel-san learn about Miyagi’s past through indirect means.) The scene is excellently played by Chan anyway; if you’ve only seen him coasting through Hollywood movies, you might be surprised to discover that he can indeed act on occasion.

The movie’s occasional lapses in pacing (it really didn’t have to be 133 minutes) are easier to overlook than Jaden Smith, the lead actor and the real-life son of Will Smith and Jada Pinkett Smith. The young Smith is reasonably composed before the cameras, but he has neither his father’s fluid charm nor his mother’s winning spunk, and he’s a wan presence. When Dre complains about living in China, it feels like whining instead of a kid reaching his breaking point. Smith is at the center of most of the martial-arts sequences, and though we can’t reasonably expect an 11-year-old to bust out moves like Jet Li in his prime, the fight choreography is relatively tame, and the star doesn’t fight with the verve and style shown by the similarly aged Chloë Grace Moretz in Kick-Ass a few months ago.

On the other hand, this movie’s version of the original’s famous “wax on, wax off” scene carries the same electric charge, with the hero discovering that his seemingly pointless training sessions have enabled him to do something he didn’t know he could do. That scene is emblematic of what this new The Karate Kid does. It’s not a deathless cinematic masterwork, and neither was the original, but it’s good enough to be that inspirational movie for a new generation and a new audience. That’s about as much as we can ask.