In the angsty, ironic world of contemporary American theater, there is perhaps no gutsier statement for a playwright to make than “My plays are successful if they give people joy, if they uplift them and change them in some positive way.” So said Ken Ludwig on the eve of the 2004 premiere of his comedy Leading Ladies at Houston’s Alley Theatre.


Ludwig is easily the most commercially successful writer of old-fashioned farces during the last two decades, so his un-cynical outlook has connected with audiences around the world. The critics have been generally kind to him, too, perhaps because he skillfully peddles a golden-hued nostalgia derived from his three great loves: the backstage world of theater, screwball comedies and musicals from the 1930s and ’40s, and classical literature. 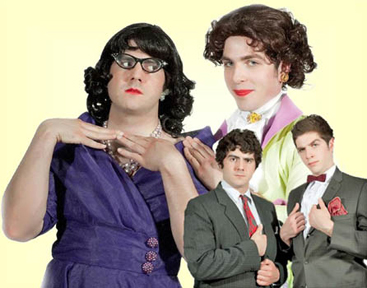 Speaking of skill, the cast of Theatre Arlington’s Leading Ladies displays it prodigiously under the wily direction of Anne Healy. My spiteful, leathery critic’s heart wasn’t especially impressed by the junk drawer of cross-dressing shtick, mistaken identities, mildly bawdy double entendres, lovers destined to be, and frantic physicality that Ludwig presents here. It’s all been done before and better, especially by Ludwig –– he insists that this script is part of an informal trilogy that includes his huge stage hits Lend Me a Tenor and Moon Over Buffalo. Arriving last of the three, Leading Ladies sometimes feels like an arbitrary rewrite. But the Theatre Arlington ensemble so completely masters the timing, rhythm, and emphasis of farce –– that trickiest breed of theatrical comedy –– that I’ll call this production a textbook example of how to deliver the laughs without exhausting the actors and irritating grumpy audience members like me.

Set in Pennsylvania during the late 1950s, Ludwig’s play concerns Leo (Stephen Tyler Howell) and Jack (Jason Kennedy), two mediocre English actors stuck in a regional U.S. tour of a dramatic revue called Scenes From Shakespeare. Leo’s big dream is to finance a trip to California and audition for Hollywood –– the 1953 American film version of Julius Caesar is proof to him that there’s a place for Shakespearean thespians at the movie studios. He and a very reluctant Jack hatch a plan to swindle a dying old rich lady named Florence (Barrie Alguire) out of $2 million by disguising themselves in drag as her long-lost nieces “Maxine” and “Stephanie.” Complicating their scheme are the old lady’s real niece, Meg (Lauren Morgan); Meg’s fiancé, the Rev. Duncan (Travis Cook); the handyman’s girlfriend, Audrey (Ashley Padovani); and the family doctor (Art Peden). An amateur performance of Twelfth Night by friends and family is planned for Meg and Duncan’s wedding party, and much inevitably lovable chaos ensues.

My main problem with Leading Ladies also happens to be one of the show’s biggest strengths –– it’s so charming as a valentine to the Bard and a paean to theatrical ambition that it never quite feels like a fully developed evening of theater. Like one of those euphemistically named “tribute bands,” the cast performs a “greatest hits” set list of farcical moments rather than an original, surprising farce itself. But how finely tuned and utterly in the moment these performers are. Jack Hardaway’s sweeping, stately, two-level set design seems to inspire them toward precisely the kind of comic elegance that Ludwig seeks. Howell and Kennedy are as charmingly rogue-ish as Leo and Jack as they are gawky and determined as Maxine and Stephanie –– they don’t try too hard for convincing female impersonations but let the characters’ nefarious mission carry them along. Morgan glows as Meg, the heart of the show who yearns to escape her cold but respectable impending marriage and find a passionate life on the stage. As Audrey, Padovani takes the archetypal “dumb blonde” role and imbues it with generous, unself-conscious wit. (Her Brando impression is priceless –– you’ll have to see the show to understand.) Indeed, the entire ensemble of Leading Ladies might be the most polished I’ve ever seen at Theatre Arlington. They do Ludwig proud, even if his retread script ultimately lets them down.

Margo Dean’s annual Ballet Concerto dance festival in Trinity Park had been lucky the last few years. Nature’s intrusions have been at a minimum. But luck ran out last week, and late-day showers washed out most of the opening night performance. Only Christine Marie Hay’s Woodstock, a nostalgic look back at that iconic rock moment, danced without toe shoes, was deemed safe enough to perform on the damp stage. The second night was iffy too. Stray raindrops fell right up to curtain time. A tarp covering the stage was finally removed, and with the aid of squeegees, mops, and towels, things were dried and ready to go about 40 minutes later.

The program was worth the wait and actually proved one of the company’s best performances. Bruce Marks’ engaging tribute to Broadway and cabaret, Straight from the Heart, seen last year and expanded now to seven sections, opened the program and set a polished tone for the evening. Four couples seated at cocktail tables created a nightclub atmosphere. Brandon Nguyen rose from one to give a suave account of Cole Porter’s “I Get A Kick Out Of You,” accompanied by Michele Gifford, Caradee Cline, Elise Lavallee, and Katie Keith. Familiar songs followed one another with stylish dancing from Ruben Gerding and Grant Dettling in featured solos, and Dan Westerfield was part of the ballet’s highlight: Michele Gifford dancing a melancholy, down-and-out hostess in “Ten Cents a Dance.”

Gifford was the workhorse of the program, dancing solos in Straight from the Heart, George Balanchine’s Tchaikovsky Pas de Deux, and the title role in Luis Montero’s new dance version of Medea. Montero usually favors Hispanic themes in his choreography; past seasons have included performances of Bolero, The House of Bernardo Alba, and Carmen. (He even created a Spanish number for the gold medal-winning Canadian ice-dancing duo in the recent Winter Olympics.) But this summer he turned to Greek mythology, breathing fire and life into this fabled, tortured character. Though based on music by “various contemporary composers,” according to the program, flavors of Spain were still evident in the recorded arrangements of mostly guitar and orchestral music, augmented by occasional sound effects, such as howling wind. The dance style was modern-classical and recounted, in straightforward sequence, the tale of Jason’s betrayal of Medea by marrying King Creon’s daughter. We also witnessed her monstrous revenge: killing the bride and King Creon with a poisonous cape and then murdering her two children, knowing they were what Jason treasured most in life. She exited triumphantly, held aloft by four supporting dancers, suggesting the fiery chariot that bears her away in the original Euripides play.

Gifford gave an intense performance, at first bewildered by Jason’s treatment, then filled with rage at his indifference. There were no extended solos but several opportunities for dramatic theatrics, which she made the most of. Dettling was the hapless Jason, eventually crushed by the magnitude of his loss, and Margarita Bruce presented a stunning nurse to the children, protecting them as best she could from the venomous aura surrounding the family.

Wendy Wester’s lighting was remarkably effective given the limited resources at her disposal, and Beth Thomasson’s draped costumes were wonderful. And whoever did the women’s hair was right on, recreating the pulled-back style, with cascading curls down the back like the kind found painted on ancient Greek vases.

The Tchaikovsky Pas de Deux, postponed until the next evening because the performance was running so late, offered the only bravura dancing on the program and was nicely performed by Gifford and Dettling. Gifford danced several years with the New York City Ballet and has the ideal Balanchine body: long legs and short torso, with a leg extension from here to next year. She double-turns on a dime and leaps with exciting brio. Dettling has come a long way since I first saw him eight years ago. His technique is improved, the jumps are better, and his whole body carriage is stronger. I remember commenting then that he didn’t raise his leg parallel to the floor in extended leg turns, and he hasn’t solved the problem. His foot still points to 8 o’clock instead of nine.

It took three days to get this program together in one flowing sequence. Let’s hope Mother Nature is kinder next year.
— Leonard Eureka