It’s often said that movies don’t obey the logic of the real world but the logic of dreams. Take Christopher Nolan’s The Dark Knight — the movie falls apart if you think of the Joker as operating by the same rules as al Qaeda rather than as a nightmarish incarnation of our darkest fears and concerns about national security. Nolan’s current movie Inception takes the connection between movies and dreams straight on, and the result is one of the trippiest summer blockbusters in recent memory. 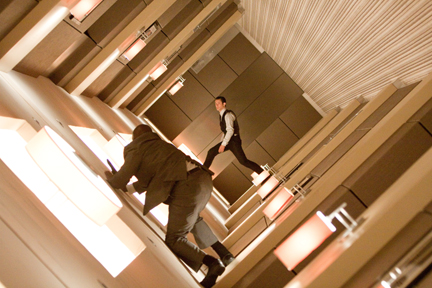 The film’s hero, Cobb (Leonardo DiCaprio), leads a team of corporate spies who break into people’s minds while they’re dreaming and steal their business secrets. The team usually stays away from the more complicated process of installing notions in their targets’ heads, but a Japanese magnate named Saito (Ken Watanabe) makes Cobb a Godfather offer: In exchange for planting a self-destructive idea in the brain of a business rival named Fischer (Cillian Murphy), Saito will pull some strings so that Cobb — a fugitive from justice in America — can return to his homeland and see his children again. The whole operation is seen through the eyes of Ariadne (Ellen Page — is there some rule that she has to wear a red outfit in every movie?), an architecture student who becomes the newest member of the team and stumbles across some secrets locked away in Cobb’s head that might jeopardize everybody.

This is a uniquely ambitious entry in that subgenre of movies that take place in the mutable world of dreams (including but not limited to The Cell, Waking Life, The Science of Sleep, and Coraline). Rather than adopting the wholly unreal look of most Hollywood fantasy films, Nolan enhances his dreamscapes by shooting on real beaches, mountainsides, and city streets. This enhances the illusion when the characters find themselves climbing infinite Penrose staircases, or when Ariadne uses her mind to fold the city of Paris onto itself like an omelet. Indeed, the paradoxical architecture here makes this movie the closest any filmmaker has come to bringing an M.C. Escher drawing to life. Cinematographer Wally Pfister and production designer Guy Hendrix Dyas give it all an elegant and beautiful look. When a Parisian street — from the teacups to the buildings — explodes around Cobb and Ariadne in sinuous slow motion, you just want to sit back and applaud politely.

While laying out the intricate details of how Cobb’s team does what they do, the movie also explicitly links the way dreams work to the way movies work. Ariadne’s job, which requires creating dream worlds in convincing detail, is similar to a filmmaker’s job. (It’s even more similar to a video game level designer’s.) When Cobb points out to Ariadne why their conversation in a café can’t be real, he’s calling attention to the gaps in both dream narrative and film language.

This gives way to the film’s breathless second half, in which the team descends into a sedated Fischer’s mind. The secrets are hidden so well there that Cobb’s people have to journey through five levels of dreams within dreams while dodging heavily armed gunmen created by Fischer’s brain, charged with keeping out dream thieves like themselves. If Cobb’s team members die at the wrong time inside the dreams, they’ll be stuck in a limbo state with no escape. It all leads to a crazy sequence in which the same characters are simultaneously engaged in shootouts, fistfights, and car chases on a rain-soaked city street, a zero-gravity hotel corridor, and a fortress on a snowy mountaintop. No wonder Ariadne has to stop at one point and ask whose dream they’re in. There are so many different clocks running at different speeds that you lose track. The sheer impenetrable complexity is in some ways deeply ridiculous, though some of the mockery will be thwarted precisely because the movie is so difficult to understand.

Nolan’s cool, clear direction makes the material a zillion times less confusing than it could have been, and yet you can’t shake the feeling that Nolan has outsmarted himself here. The movie’s emotional core is supposed to be Cobb’s inability to let go the memory of his dead wife (Marion Cotillard), but Nolan actually comes up with stronger stuff dealing with Fischer’s memories of his overbearing, recently deceased father (Pete Postlethwaite), which Cobb’s team messes with in order to achieve their aims. DiCaprio and Cotillard’s performances are too cerebral where they needed to be raw, and while the actors in this heavyweight supporting cast (including Joseph Gordon-Levitt as Cobb’s right-hand guy) aren’t bad, they’ve all been better elsewhere.

Still, this movie does send you tumbling down a fascinating rabbit hole. There may not be as much to Inception as meets the eye, but merely trying to puzzle out all the different layers of dream narrative keeps your mind constantly exercised while your eyes are on the lush décor and action sequences. With so many large concepts running amok into loops, crannies, and cul-de-sacs, you’ll need multiple viewings to catch everything here. If nothing else, this big brain-teaser of a movie is a great conversation piece.