If you’ve had your fill of comedies that feature men who are unable or unwilling to grow up, you should really check out Cyrus. This lo-fi comedy with big-name stars takes that notion to a logical extreme and does so in a distinctively funny way. John (John C. Reilly) is a divorced L.A.-based freelance video editor who finally catches a break the day he meets Molly (Marisa Tomei) at a party. They fall in love, and John can’t believe that such a gorgeous, sexy woman has dropped into his life. “Why are you flirting with me?” he asks early on. “I’m like Shrek!”


Soon, however, it becomes clear why she’s unattached. The reason is her 21-year-old son Cyrus (Jonah Hill), a wannabe musician who still lives with her. Cyrus and his mom have grown way, way, way too close, and they seem unaware that their relationship might be at all odd — in mixed company, Molly playfully wrestles Cyrus to the ground, the two of them giggling the whole time. Mixed company finds that pretty weird. 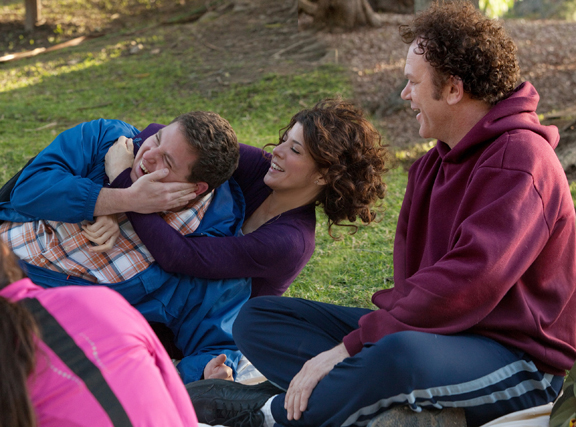 Cyrus is a great character, a pre-sexual monster who feeds off his mother’s love and regards the world as a big trap to separate him from her. At first he seems friendly enough toward John, but his attempts to undermine John and Molly’s relationship become more and more overt as the movie goes on. Cyrus is an emotional infant, but he’s no fool — he knows exactly how to pull his mother’s strings. Midway through the film, he reduces his mom to a pleading wreck when he suddenly announces his desire to move out of the house. (Watching this, John recognizes this as a tactical masterstroke.) The psychological warfare between John and Cyrus makes for compelling viewing, and the filmmakers use horror-movie techniques to good effect as John repeatedly catches Cyrus lurking in the shadows of Molly’s house, mutely watching him. In one of these instances, Cyrus has no pants on and a big, sharp knife in his hand.

Hill plays Cyrus with a quiet, focused intensity that he’s never shown in any of his other films. He makes Cyrus rather scary, especially in a whispered scene late in the film when John and Cyrus drop their false fronts and openly voice their hostilities — you’ll never forget the demented gleam of conviction in Cyrus’ eyes as he vows to break up John and Molly at any cost. Cyrus’ behavior is frequently psychopathic, yet Hill doesn’t forget to humanize him either, as in an early scene when Cyrus tries to intimidate John by playing his crappy New Age techno music, trying to dance to the rhythm but being too inhibited to do it properly. (Of course, he loosens up when his mom shows up.) The terrible, gnawing psychic need at Cyrus’ center is clearest when he drunkenly assaults John while screaming, “You can’t take my mom away from me!” Maybe the most pathetic moment comes late in the film when Cyrus cries, screwing his knuckles into his eye sockets the way a little boy would. This is Hill’s most impressive performance to date.

The movie is the brainchild of Jay and Mark Duplass, the brothers who are sometimes associated with the so-called “mumblecore” movement because of their 2005 road-trip comedy The Puffy Chair and their 2008 comic horror flick Baghead. (Mark has also acted in other people’s films such as Lynn Shelton’s Humpday and Noah Baumbach’s Greenberg.) This is the first movie in which the Duplasses have used Hollywood actors, and they let Reilly and Hill ad lib at will. This is a smart move; it’s hard to imagine actors without extensive comedy experience coming up with some of the laugh lines here. With this film, the Duplasses show that they know how to use big-name talent, something that surely augurs well for their future as filmmakers.

The trouble is, having set up the family situation beautifully, the Duplasses seem unsure how to handle the (admittedly thorny) implications of it. The unhealthy emotional attachments go both ways — Molly cries herself to sleep when her son isn’t home. She’s not going to turn into viable relationship material just because Cyrus miraculously decides that his mom’s happiness actually matters. Bong Joon-ho’s Mother from earlier this year went to much more disturbing places dealing with similar issues. Even without seeing that movie, you can still tell that the Duplasses skirt some pretty big issues and resolve this story way too easily.

Still, you don’t often see unbalanced characters like Cyrus in movies, much less in comedies. Cyrus’ main accomplishment is making Cyrus into such a palpable presence. His wants, his urges, and the cunning lengths to which he is inspired to go so he can protect the relationship that means everything to him all feel quite real. Through him and the many uncomfortable laughs that he elicits, this unabashedly creepy comedy has something important to tell us.