Ramon Garcia doesn’t look like your stereotypical record label owner — he’s clearly from DIY, not corporate, ranks. His label, Rise & Shine Records, is a one-man operation, and that one man is a friendly, unassuming 21-year-old Arlingtonian with no formal training who took his dream and learned how to turn it into reality. Rise & Shine has one release out and a couple more on the way, all on a shoestring budget. “DIY gives me a place where I can really be myself,” Garcia said. “I’m surrounded by good friends and good music.” 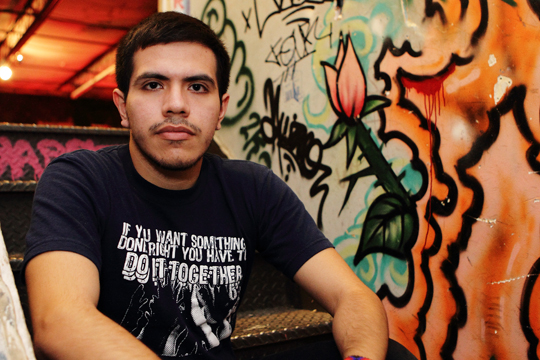 Garcia was weaned on the 817’s underground punk and hardcore scenes. The concept of freedom permeating punk hooked him immediately. He saw that many of the faces filling up the clubs were the same people who were often playing there, making their own merchandise, self-releasing their bands’ music. There were no set rules, no one right way to do anything.

Those early shows left a lasting imprint on Garcia and led him inexorably to 1919 Hemphill. But it wasn’t until his freshman year at the University of Texas at Arlington in 2008 that he began regularly going to listen to music at 1919.

You can credit his early infatuation to High Anxieties vocalist Chris Morgan, a 1919 regular. The two met in a history of jazz class, becoming quick friends, hanging out at school, endlessly discussing music. Garcia found the nonprofit, volunteer-based nature of 1919 Hemphill inspirational. No one entertained any delusions of grandeur. No one was a “professional.” If someone at 1919 wanted to see an amazing show, he booked it himself.

Morgan and Garcia seemed to share another trait besides love of punk music and independence: They tend to leap before they look. In Morgan’s case, he and his bandmates recorded their debut release in the summer of 2009 before looking for anyone to release it. Then, when Morgan suggested that Garcia form a record label to release the record, Garcia jumped right in. Preparation, knowledge, planning? Nah.

In Garcia’s case, he learned that a DIY spirit isn’t all you need to create a record label. You also need money. So he turned to his friends for help. “If you want something done right, do it together,” he said, quoting the slogan on a 1919 t-shirt.

In September 2009, a benefit show at 1919 Hemphill raised some money for the 7-inch’s release. The event was enjoyable, but the success was modest: The $100 in proceeds wasn’t going to get the job done. Garcia chipped in some of his own money, as did the band — as did a student in Garcia’s statistics class who was so impressed that he donated $200. That did the trick, so Garcia filled out the forms and sent the record off for pressing.

Next question: How the hell was he going to create the album art and packaging? His friend Al Rios, bassist/vocalist for Genius Party and longtime volunteer at 1919 Hemphill, offered to design the artwork. He also taught Garcia the process of screen-printing so he could create the packaging himself.

The resulting release, Negaduck, has the simple aesthetics of classic punk records: It’s straightforward and lovably rough. Negaduck will officially be released Thu., July 29, at 1919 Hemphill. “From what I’ve learned from this thing, there isn’t really any money to be made in punk,” Garcia said. “So if you’re going to [get into the label business], it might as well be for your friends.”