As a toddler, Michael Richardson would haul a suitcase full of 45rpm rock records around his house. He couldn’t even read, but if a family member requested a song, he would find it by locating the record’s label. Now “Big Mike,” as he’s commonly known, is 38, and, somewhere along the way, he managed to assimilate that suitcase full of tunes. 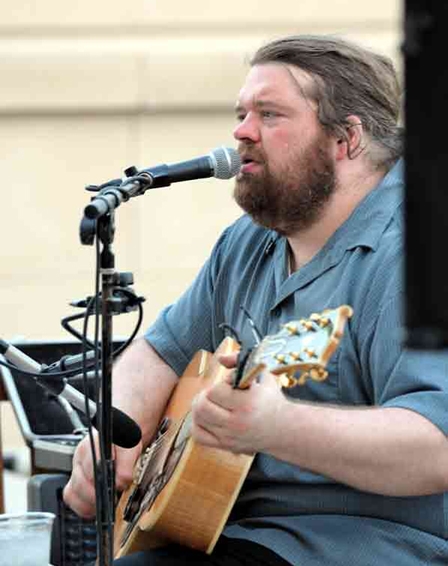 Over the past few years, Richardson has established himself as the go-to guy for classic rock cover shows –– and more. He has solo residencies at the Flying Saucer Draught Emporium (Sunday nights) and The Moon (Tuesday nights) –– for his Moon gigs, he has a killer backing band (Big Mike’s Box of Rock) that includes drummer Matt Mabe (Stella Rose, Jefferson Colby). Richardson also plays in several tribute acts: Protect & Swerve (The Police); the oDors (The Doors); Dazey Chain (old-school R&B); and Four Way Street (Crosby, Stills, Nash, and Young). In the past, he also sat in with two Beatles tribute acts –– Hard Nights Day and Me and My Monkey –– and with the local original prog-rock outfit The Underground Railroad. Over the past year, Richardson has laid down licks on albums from locals David Matsler, Luke Wade, and EPIC RUINS.

A humble guy, Richardson describes himself as a “decent” guitar player, but he’s really selling himself short. Big Mike’s pretty damn good, and he’s also adept at the piano, even though he quit practicing years ago, just after high school.

Richardson has been holding down his solo residencies for more than five years now. He used to be a “cubicle bitch” during daylight hours, he said, but now that he’s a much sought-after cover guy and session player, he’s all music, all the time.

Richardson still feels there are some holes in his classic rock repertoire, enough to disqualify him from “living jukebox” status. But at one point a few years ago, he tried to list the songs that he could ably cover to satisfy customer requests, but he gave up after about 1,000. “When it comes to The Beatles, [Rolling] Stones, [Led] Zeppelin, or The Who,” he said, “it’s kinda hard to stump me.”

Richardson often draws bigger crowds than a lot of original acts. Part of the reason he’s so popular has to be that classic rock is still vital –– even the undergrads who come out in droves for his Moon gigs are conversant with dinosaurs such as Zeppelin, Aerosmith, The Eagles, and the Stones.

Richardson sees himself more as an “interpreter” than a songwriter. He likens writing songs to “mowing the lawn” — he’d rather have somebody else do it. “I don’t have a lot of inspiration,” he said. “My life has been cushy.”

Classic rock, to him, is “removed from aging. It doesn’t sound dated, and it’s where I belong. I feel like I was born in the wrong era.”

Many musicians claim to have born a few decades too late, but few can conjure the spirit of bygone times as convincingly as Big Mike. “I carry the songs confidently,” he said. “My voice is what sells me. It’s a fearless voice.”

He also will imitate the vocal details of such unique singers as Tom Petty and John Lennon, bringing to life the real McCoys –– even if only for one night at the bar. “I’m there to perform a service,” he said. “I do what I love and make people happy.”

And judging by the jubilant crowds, very happy. l