Modernism is sexy. And not just because Mad Men is set during the period of the style’s apex, the early 1960s, though there’s no denying the show’s appeal. No, Modernism conjures up an era, one in which father still knew best, women knew their place, and the thought of an African-American president was as fantastical –– and frightening — to white Americans as a night of the living dead. At auction recently, a Serra from the late ’60s went for $1.98 million (the highest amount ever paid for a Serra), a Pollock sold for $8.7 million, exceeding its $6 million estimate, and a signature color-field Rothko went through the roof to the tune of $31.4 million. People are not only still paying for Modernist masters but paying more than ever.

Closer to home, Amon Carter Museum is driving the Modernist bandwagon. The museum has devoted the entire year to Modernist exhibits, including American Modern: Abbott, Evans, Bourke-White (Oct. 2-Jan. 2), Leon Polk Smith: The Tamarind Lithography Workshop (through Dec. 5), and the centerpiece, Constructive Spirit: Abstract Art in South and North America, 1920s-’50s (through Sept. 5). Featuring approximately 80 seldom-seen paintings, sculptures, prints, photographs, drawings, and films, Constructive Spirit is far from just a group show. It’s almost like a documentary movie. Along with some prime examples of the style –– you won’t see any Duchamps or Légers, unfortunately –– the exhibit also offers plenty of wall texts that will help explain the popularity of abstract art among certain American artists, including many lesser-knowns. 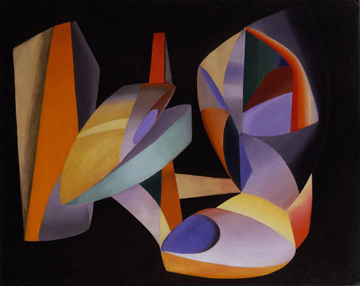 After the breakthroughs of Picasso, Duchamp, Kandinsky, and Klimt at the dawn of the 20th century and after World War I, abstraction became the lingua franca of artists with a pulse. They reflected a society overrun by monstrous machines (with their strong geometric forms), conflicted over the question of whether we could believe in a God in the face of war’s atrocities, and convinced that the status quo equaled failure. The Big Questions that still haunt the art world today –– What is art? Why does it matter? Who is an artist? –– have roots in the pre-WWII period.

Trying to make sense of the times occupied the imagination of almost every visionary artist. One of the most significant painters of the era is Arshile Gorky, who is represented in Constructive Spirit by “Aerial Map,” one of only two remaining panels of his 10-panel aviation cycle (commissioned by Newark Airport). What is abstracted in “Aerial Map” is the familiar shape of the United States –– the southernmost tips of Texas and Florida and northernmost tip of Maine are greatly exaggerated, giving the painting the lightheartedness of a cartoon. Blobs in golds, reds, browns, blues, and purples provide a vibrant backdrop to the stark white of the United States, whose surface is crisscrossed by dashes and dotted by circles and rectangles.

“It is the inner significance of things that counts, and that is a quality that is abstract,” said artist Raymond Jonson in 1947. “The non-objective in art deals not with objects but with shapes, rhythms, forces, and forms and establishes a new object. … In its finest sense, it establishes and becomes a fact within itself.” Form is king in abstract art, and Constructive Spirit is full of shapes both amorphous and rigid. Abstractions of skyscrapers find their ways into paintings by Charles Green Shaw and Hector Ragni, among others. Paul Kelpe’s literal painterly approach to capturing the poetry of the machine age, “Machine Elements,” features honest representations of levers, wheels, and a screw. Theodore Roszak’s “Airport Structure” sculpture is a B-movie rocket ship of copper, aluminum, steel, and brass. The heavy influence of Mondrian is manifest in grid paintings by Tomás Maldonado, Alfredo Hlito, and Josef Albers, among many others. Early Modernists also developed a taste for Primitivism –– thanks mainly to the fame that surrounded the long excavation of King Tut’s tomb (circa the early 1900s through the ’20s). Totems, all-seeing eyes, and other glyphs appear in several Constructive Spirit pieces.

In true Mad Men style, some of the most decorative pieces are the most elegant. Maria Freire’s “Abstracción” is a single bronze wire that curves around itself to form a kind of skeleton of a space-age pyramid. Equally rhythmic are Franz Weissmann’s “Composição con semicírculos,” a shiny aluminum totem of crescents, and José de Rivera’s “Construction #29,” a small single piece of brilliant stainless steel curved into a fourth-dimensional letter “b” lying on its belly. Or something.

One sculpture is accompanied by a film. On the wall above Gego’s “Gegofón,” a winged cube consisting of black iron grills, different perspectives of the piece are shown, producing “relations of lines created neither from the reality of seeing nor from the reality of knowing,” according to the artist.

Shaw deserves the last word, however. “Art, since its inception, has never depended on realism. Why, one cannot help wondering, should it begin now? Art, on the contrary, is (has been and will always be) an appeal to one’s aesthetic emotion and to one’s aesthetic emotions alone, not for the fraction of a split second to those vastly more familiar emotions, which are a mixture of sentimentality, prettiness, anecdote, and melodrama.”

Of course, for every 15 pieces that dazzle –– especially John Ferren’s “Paris Abstract,” a mesmerizing painting of rainbow-glowing shapes on a black background –– there’s a dud. Maybe that’s too harsh a term. Let’s say there’s a piece that some artist had to do to push American art further but that now looks severely dated. Yes, we’re talking about Ad Reinhardt’s “Triptych Painting,” a vertical panel of all black. You wouldn’t see that hanging in Don Draper’s office, that’s for sure.

Thru Sept. 5 at Amon Carter Museum,