Middle Men’s version of history is a lie. According to this movie, it was the pornographers who invented online shopping before the major retailers or credit card companies cracked the problem. If that were true, it would mean that every time you logged on to purchase rock concert tickets, designer bath towels, or the latest Stephenie Meyer novel, you’d owe it all to porn. This idea clearly tickles the filmmakers. It tickles me too. It’s not true, though — SSL encryption was invented by the programmers at Netscape. Sexy, huh? This fudging with the truth would matter a lot less if Middle Men were the fun, filthy lark that it promises to be. Instead, it turns into a gloomy morality tale. 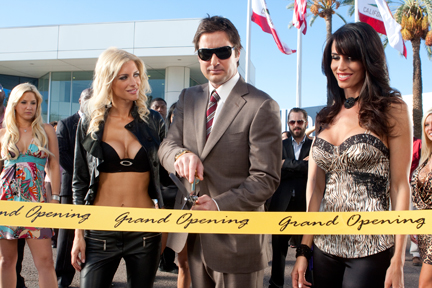 Luke Wilson plays Jack Harris, a businessman who leaves his family behind in Houston in 1995 to manage a friend’s bar in L.A., a job that he does magnificently. He owes his gig to a shady lawyer named Hagerty (James Caan), so he can scarcely refuse when Hagerty asks him to clean up a mess caused by two self-employed porn-loving computer whizzes named Wayne and Buck (Giovanni Ribisi and Gabriel Macht) who’ve tangled with Las Vegas hotel security. Jack soon discovers that Wayne and Buck have figured out how to sell sex pictures online, but they’re cokeheads with no idea how to run a business. They’re lucky, then, that Jack — who has no particular interest in porn — nevertheless instantly knows how to refine their invention so that everybody can make a pile of cash. Then again, Wayne and Buck are also idiots with huge egos who can’t leave well enough alone, and they soon get Jack in deep trouble with both the Russian mob and the FBI.

That attitude helps leach the enjoyment out of this movie, but it isn’t the sole culprit. Wilson gives his typical low-energy performance here and demonstrates little chemistry with either Jacinda Barrett (with an unsteady Texas accent) as his neglected wife or Laura Ramsey as the porn star with whom he has an affair. The story is resolved with a heavy-handed child-kidnapping subplot that the movie doesn’t nearly begin to earn. Gallo’s directorial touches include musical cues that are so obvious as to insult your intelligence (Hall & Oates’ “You Make My Dreams,” OutKast’s “The Way You Move,” The Rolling Stones’ “You Can’t Always Get What You Want”) and voiceover narration that sometimes pays off (as in the quick montage of men consuming pornography through the ages) but more often results in tedious, unnecessary exposition.