So Paranormal Activity 2 is coming out soon. Good luck to it, because while I thought the original Paranormal Activity was built well but didn’t deliver any solid scares, The Last Exorcism is without a doubt the most terrifying movie I’ve seen in a long while. 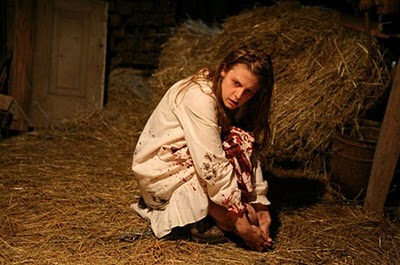 Similar to Paranormal Activity, The Blair Witch Project, and others, The Last Exorcism is a “found footage” movie, purporting to be a documentary. This one’s about a preacher, Cotton Marcus (Patrick Fabian), who was once a showboater and professional exorcist but is now a skeptic out to expose the tricks used by exorcists to convince the gullible faithful of demonic possession. His crew’s first stop is the Sweetzer home in the boonies of Louisiana, where father Louis (Louis Herthum) believes his teenage daughter Nell (Ashley Bell) is possessed.

The movie takes its time getting to Nell and is stronger for it. We spend a lot of time with the preacher, and Fabian makes him likable and understandable without melodramatic pathos. Bell plays the poor possessed little girl part perfectly, but instead of body contortions and spewing vomit, her demonic signs are subtle things like stares and a smirk that will send shivers up your spine. The movie’s documentary style serves it well, the tension building in an underplayed, natural way so that once the scares do start they seem in your face and very real.

And what scares! The movie uses its gimmick superbly, controlling what the audience does and doesn’t see, and every sweep of the camera can reveal a new horror. There are plenty of very good jump and creep-out moments, but special mention has to go to one spectacular scene that uses the documentary gimmick and that horror fans are sure to talk about. Notice that I haven’t mentioned the PG-13 rating yet. That’s because once the movie gets going, you won’t even notice the lack of gore. I’d be lying if I said I wasn’t covering my eyes throughout a good portion of the film.

But there are two noticeable trips. One, music cues are added throughout the movie, completely breaking the documentary feel. The other trip, unfortunately, is the ending, which feels like the movie suddenly switches genres. It’s a stylistic break that doesn’t fit with what’s come before.

Still, despite its failings, this is a strong horror movie, perfect for scaring a date into your arms, for examining with fellow horror fans, or (since it’s PG-13) using to traumatize your kids. If you’re tired of the endless remakes in the multiplexes, this is a great, horrifying refuge.