Before Machete was a real movie, it was a fake movie. For their 2007 double-bill Grindhouse, Robert Rodriguez and Quentin Tarantino had four trailers created for nonexistent films to run alongside their movie, partly to re-create the feel of a 1970s B-movie experience, mostly just to score a few laughs. They hired film-directing buddies to make three of these, but Rodriguez himself wrote and directed the trailer for the exploitation flick Machete. (Tagline: “They fucked with the wrong Mexican!”) 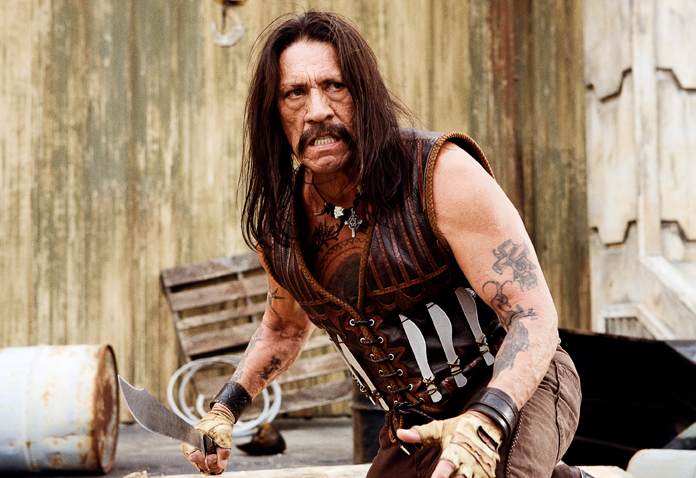 Since 2007, two things happened. Rodriguez decided to make an actual full-length movie out of his fake trailer, and the ever-simmering national debate over illegal immigration heated up once again. This makes for some fortunate timing for Machete, but let me be clear: In contrast to scrupulous, socially conscious dramas like Sin Nombre, this is not a responsible, thoughtful examination of the subject. It’s much more fun than that.

Longtime character actor Danny Trejo gets his turn in the spotlight as Machete Cortez, a Mexican federale whose honesty gets him targeted for assassination by the drug lords in his country. Lying low illegally in Texas, he’s mistaken for a common day laborer by a shady businessman named Booth (Jeff Fahey) and offered a briefcase full of cash to assassinate a state senator (Robert De Niro) who’s spouting virulent anti-immigrant rhetoric and running around with a militia group that guns down Mexicans crossing the border. Machete agrees, thinking to run off with the cash, but quickly finds that the whole thing is a frame-up. On the run, he contacts an aid network for help in taking down a vast conspiracy that includes the senator, Booth, the militia, and a Mexican drug kingpin (Steven Seagal — !) who killed Machete’s wife years ago.

The Rodriguez we’re getting here is the Rodriguez of Desperado and Once Upon a Time in Mexico rather than the Rodriguez of Sin City or Spy Kids. It’s his movie through and through, even though he technically shares co-director credit with his longtime editing collaborator Ethan Maniquis. The action goes way over the top at times, like when the hero disembowels a bad guy and then uses his intestines as a rope to rappel out of a window. Machete (strangely enough, that appears to be his actual name) is so unkillable that he shakes it off when he’s shot in the head — the bullet is stopped by another bullet already lodged there. The movie sets itself up as a Latino version of the blaxploitation films of the 1970s, with a Robin Hood-type hero who operates outside the law to help the oppressed underclass and whom women find irresistible. This last bit is best taken as a joke here; the pockmarked Trejo is one of the ugliest actors around.

Machete dances all over the line between straight-up exploitation and genre parody, and at times Rodriguez doesn’t do it as deftly as other filmmakers do. Jessica Alba is, as you might expect, fatally lightweight as a sympathetic immigration agent. All the material given to Lindsay Lohan, who portrays Booth’s drug-addicted daughter, is entirely too on-the-nose — she spends the entire movie either naked or wearing a nun’s habit. The film includes footage from the original trailer like Machete flying through the air on a motorcycle while firing a Gatling gun, yet the action sequences aren’t as awesome as they could be. (Or maybe that’s just my impression after a summer with so many movies featuring great action scenes.) To be fair, it isn’t Rodriguez’ fault that the climactic fight scene between Trejo and Seagal is so choppy. He had to do something to disguise the fact that Seagal now moves with the speed of a tranquilized tortoise.

The movie’s much better at playing the immigration debate and the Latin ambience for comedy. Tiny details wind up hitting home, like the vintage gross-out gag involving a cell phone, or a taco-stand vendor (Michelle Rodriguez) who invents a Guevara-like female revolutionary alter ego and calls her Shé. Despite his liabilities in the action department, Seagal is still niftily cast as a heavy in every sense of the word, and he makes a useful contrast with a lean-and-mean Don Johnson as the militia leader. Cheech Marin does the funniest work here as Machete’s priest brother, who has a bank of video surveillance monitors in the shape of a cross. During one scene when Machete leaves two naked unconscious women in his brother’s care, Marin’s deadpan response is priceless: “The Church can always use good people.”

The most powerful satire here comes from the early revelation that the senator is a demagogue who’s merely playing the militia for useful idiots. Cornered late in the story, he whines hilariously, “I’m not even from Texas! I hate the heat!” The movie could have used a few more insights like this, but then Machete isn’t interested in taking a nuanced, comprehensive view of the issues surrounding illegal immigration. It just wades into the toxic debate and detonates a canister of laughing gas.