Adam Adolfo, executive director of Artes de la Rosa, spent many hours researching the life and artistic philosophies of playwright Tennessee Williams before staging the Latino performing arts group’s current production of Cat on a Hot Tin Roof. One of the anecdotes about Williams stuck with him as a guiding philosophy for his “Latinized” interpretation of the 1955 script.

“Williams would go to different productions of his work and laugh during the show just to piss off the director,” he said. “He thought people staged his plays with too much heaviness and seriousness. ‘There’s a lot of humor in there too,’ he insisted. That’s one thing we tried to do: Take the Southern archetypes in this show and give them humor and humanity.” 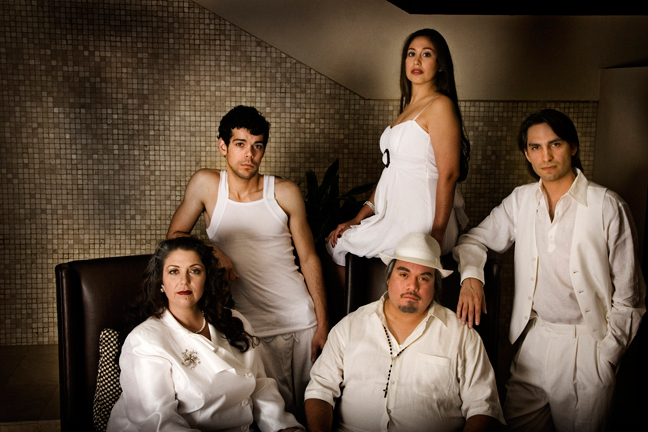 Before Adolfo was hired by Artes de la Rosa last November, he was deep in grand opera and Shakespeare with The Living Opera in Richardson and companies in Arizona and Ohio. The Corpus Christi native confessed that, while he was growing up, he considered Shakespeare and American playwrights like Williams, Arthur Miller, and Eugene O’Neill to be “dead white people’s theater.” Not only did his college studies reveal the universality and epic nature of those writers’ masterpieces, but they fired an early ambition in him: “I wanted to provide Latino actors with a chance to play iconic roles that they would otherwise never get to do — without, I should add, changing the integrity or the intent of the playwright’s work.”

For Artes de la Rosa’s version of Cat on a Hot Tin Roof, Adolfo has combined parts of the script’s three published versions with several unofficial ones that Williams had worked on. The director then collaborated with his cast –– all of whom are theatrically trained, many with extensive stage credits –– to find subtle but defining ways to turn Williams’ in-fighting Mississippi Delta plantation family into a Cuban clan living on a vast sugarcane farm outside of Miami. The idea to turn the family into Cuban immigrants came from little details in the play and the playwright’s own fabled life.

One description written by Williams that stood out for Adolfo was of Maggie the Cat, the show’s lovelorn wife (played in Fort Worth by Stephanie Cleghorn Bluth), walking through a cloud of cigar smoke. “And I thought, ‘Hmm, who’s famous for their cigar making?’ And then, of course, Williams loved Havana and visited there many times. He met Castro once, and it turned out that Cat on a Hot Tin Roof was one of Castro’s favorite American plays.”

Anyone who’s seen Richard Brooks’ 1958 movie version will probably attest that it heavily glamorizes the play –– who doesn’t love watching Elizabeth Taylor and Paul Newman at their peak fighting in slip and pajamas? –– even as it bowdlerizes and caricatures it: Maggie the Cat is a drawling Southern vixen pestering her alcoholic, possibly gay husband Brick for sex in their lavish plantation bedroom. The movie deleted the intriguing information that the bedroom was originally shared by the gay couple who owned the estate and took in the young, itinerant Big Daddy, now the family patriarch, as a field worker and protégé. Adolfo had the Artes de la Rosa bedroom set designed to suggest a cage as per Williams’ many allusions to the characters’ being trapped. And while Adolfo doesn’t quash the gay themes the way the movie did, he didn’t have much interest in resolving the question of Brick’s sexuality –– he told Joey Folsom, the actor who plays the tormented ex-star athlete and hounded husband, to make up his own mind and not tell Adolfo. “I think people can get caught up in the taboos of the show,” he said. “We wanted to focus on the dynamics of the family and the way these personalities relate to each other.”

Artes de la Rosa’s Cat on a Hot Tin Roof is the first play in a five-year project. The American Classics Initiative, as Adolfo has dubbed it, will include four more Latino-influenced productions of seminal American theater works. He’s casting around for other famous shows and has decided on only one so far –– at some point, the group will definitely stage Arthur Miller’s Death of a Salesman and place it in an Arizona border town. For now, though, Adolfo has been amazed at the hunger among area Latino actors to perform in a Tennessee Williams show –– people drove from all over North Texas to audition for Cat. At the same time, he doesn’t want his American Classics Initiative to be strictly for Latino audiences.

“I came in [to the job of executive director] with a mission of innovation,” he said. “I want to open up the fine arts to the Latino community, but I also want to open Artes de la Rosa to the community as a whole. It’s our job to push the artistic envelope and stage shows in a way you haven’t seen them before.”

Cat on a Hot Tin Roof