Melissa Kirkendall and Mark Nobles’ documentary about the ’60s-era Fort Worth teen scene, Teen A-Go-Go will make its world debut on Saturday. Not here, though. Rather, in New Orleans as part of Ponderosa Stomp, the world’s largest festival of ’60s garage bands and similar throwback outfits. Teen A-Go-Go has screened locally a couple of times, most notably at the ’08 Lone Star International Film Festival in Fort Worth, but only as a work in progress. 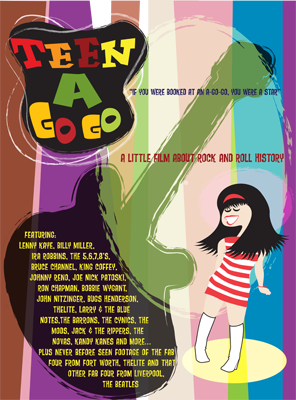 The full film also will be screened in October at the WFMU Record Fair –– WFMU broadcasts from the Big Apple and is one of the oldest and most influential radio stations in the world, so the Record Fair has to be a big deal, especially among hipsters. More Teen A-Go-Go screenings are planned through spring 2011 locally, here in the States, and in Europe. DVD copies of Teen A-Go-Go will be available for sale at all screenings and via various online vendors. The movie was inspired by Norton Records’ three-volume boxed set Fort Worth Teen Scene (see: “Fort Worth A-Go-Go,” Dec. 17, 2003).

The Cush is now a band-band. It used to be pretty much just the married couple of Burette and Gabrielle Douglas, the guitar-and-bass half of Buck Jones, an early-’90s mod-rock quartet in the vein of The Toadies and Tripping Daisy. After relocating from Texas to Vermont several years ago for family reasons, the Douglases recently moved back here and, to become a band-band, recruited guitarist Josh Daugherty (late of Union Watts, Pinkston, and Dove Hunter) and fierce drummer Todd Harwell (late of both Doosu and Flickerstick). Though The Cush has played some North Texas dates, the Daugherty-Harwell version will make its North Texas debut on Friday at The Double Wide (3510 Commerce St., Dallas, 214- 887-6510) with Dove Hunter. Next Wed., Sept. 29, the Douglases will play an acoustic set with Telegraph Canyon’s Chris Johnson at the City Tavern (1402 Main St., Dallas, 214-745-1402). Fort Worth Cush shows are to follow.

Last fall, The Theater Fire’s James Talambas did some work with The Migrant (né Bjarke Bendtsen), a singer-songwriter from Copenhagen (see: HearSay, Feb. 17, 2010). Though the results, entitled Amerika, won’t be released until spring 2011, you can sample some of Bendtsen’s other work now. He’s just released Travels in Lowland, recorded in Denmark with some fellow musicians. Bendtsen will perform in North Texas in November, though not at Lola’s Saloon, where he performed last May; he’ll be in Dallas.

Telegraph Canyon, Whiskey Folk Ramblers, The Burning Hotels, Analog Rebellion, and Mount Righteous are the 817 outfits that will be playing Oysterfest, a day-long two-stage music –– and oyster –– festival at Lochrann’s Irish Pub & Eatery (6195 Main St., Frisco, 214- 423-2600) on Saturday. Also slated to play are The Old 97’s Rhett Miller, Efterklang, The Roomsounds, RTB2, Bowerbirds, and Seryn–– there will be 20 bands total. Tickets are $15 advance, $20 day of show.

The lineup for this season’s final First Friday on the Green concert has been set. On Oct. 1, two of Fort Worth’s finest –– Telegraph Canyon and Whiskey Folk Ramblers –– will perform. As always, the show will be free and will be at Magnolia Green Park.