Onstage, the techno hip-hip duo LAZËR delivers a high-concept performance punctuated with lowbrow shenanigans. The official — and invented — backstory for ‘the boyz’ is that a dictatorial master rhymer named Hammel and a strung-out, sex-crazed rapper named Briso have left the Rhineland to conquer America (and American women) with their music.


Hence a LAZËR show consists largely of two skinny white guys in sunglasses and Speedos gyrating their crotches and asses while dropping nihilistic, free-associative rhymes in thick European accents. Tarrant County-based Gabe Pippen, 31, who plays Hammel, and Alan Nosellot, 29, who plays Briso, are at once very serious and totally goofing off when they don their Euro-trash personae. 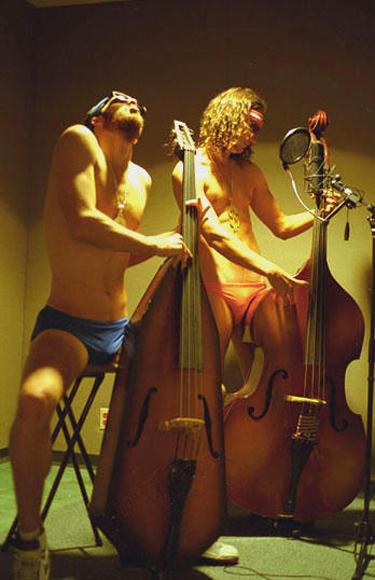 “We’re always looking for new ways to amuse ourselves at the expense of our audience,” said Pippen. And Nosellot added, “We’re a hip-hop update of Spinal Tap, playing characters who make ridiculous music but have no clue that it’s ridiculous. Hammel and Briso’s musical tastes are 10 years old, like ours.”

Sir Mix-A-Lot, Ol’ Dirty Bastard, and Dr. Dre are among the big influences for Pippen and Nosellot, who met in an art class at the University of Texas at Arlington seven years ago. Their own musical backgrounds are scant, but they forged an instant friendship based on their shared love of hip-hop and creating character-based, improvisational monologues for each other’s amusement. (“We’re total heterosexuals,” Pippen said, “but we had man-crushes on each other, and our collaboration is sort of like a marriage.”) In 2004, they became the lead vocalists for an informal musical outfit called Yeah, But It’s A Dry Heat. From the beginning, they liked messing around with the audience –– it wasn’t unusual for the band to break up in mid-show and then reform as a totally different entity with a name like Unicorn Holocaust.

LAZËR made its debut in 2005 as a side project of Yeah, But It’s A Dry Heat, but, predictably, Hammel and Briso crowded out all other musical personalities. Pippen and Nosellot created an elaborate fictional history for LAZËR with their debut album Let Me Dance You, a meandering but surprisingly infectious effort produced by Pippen that leaned heavily on their mutual love of Kraftwerk and other kraut-rockers. All the exposed flesh and strutting rooster-rap of the live show were never a problem for these guys –– Pippen was born in small-town Oklahoma, Nosellot in small-town Louisiana, so they each claim to have “a wild, exhibitionistic hillbilly streak.” Their shows at The Wreck Room, Lola’s Saloon, Rubber Gloves Rehearsal Studios, Hailey’s, and The Curtain Club have earned LAZËR a loyal following.

After a two-year hiatus, LAZËR has returned with the new Pippen-produced album, Twatobahn, and a tighter focus on musical quality and intricate, absurdist raps laced with pop-culture references filtered through a clueless Germanic sensibility. Live and in the studio, Hammel and Briso are now backed by four talented musicians, freeing up the frontmen to hone their rapid-fire rhyme exchanges rather than relying quite so heavily on the LAZËR backstory shtick to carry the shows. “When we wrote the first record it was sort of an inside joke for ourselves,” Pippen said. “While we were making Twatobhan, we kept the idea of live performance very much in mind. This is a more evolved version of the original concept, which was just Alan and I onstage in Speedos and sneakers with digital music tracks. We always try to top what we did before.”

With that in mind, Pippen and Nosellot are currently reworking LAZËR’s live act. With an album they can feel proud of, they want to make their performances less obviously comic and more intense, unpredictable, and performance arty a la Andy Kaufman. Pippen said that when he caught himself telling punchlines onstage, he realized the show needed an overhaul. (“There are some great Weird Al songs, but we don’t want to go down that avenue,” Nosellot said.) They decline to be specific about the changes but hope to drop extreme Teutonic rhymes at upcoming gigs in December and January. They haven’t confirmed any dates yet, but they’d love to take Hammel and Briso into some unorthodox venues, places where they can confuse and unnerve unsuspecting audiences. “We’ve gotten good local buzz,” Nosellot said, “but we wouldn’t consider it a fall from grace if we got to play at a Quizno’s.”