A while back, I had one of those Thursdays where I just didn’t want to hear it. You know what I mean by “it.” The pronoun encompasses every piece of petty bullshit in life, from a punctured tire to an automated red light ticket to your kid getting sent to the principal’s office. I went to work at The Moon that night with a thin margin of tolerance for those sorts of hassles, my irritability hanging on me like a scarf made out of Oscar the Grouch. Around midnight, a cadre of college kids spilled through the front door. One of them looked at my beard and said, “Have you seen The Hangover?” 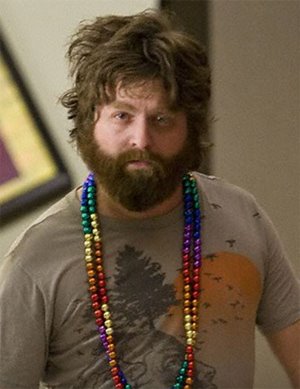 I saw where this was headed, and I just gave up. I replied that I had, but that I didn’t think it was as funny as I wanted it to be. “Oh,” he said. “Well, how long did it take you to grow that beard? Because I’m going as Alan from The Hangover for Halloween.”

Now this was probably at the end of July, so I guess if he kept at it, he’d probably be on point by now (beardly speaking, of course) to slur through a Zach Galifianakis impression come this Halloween weekend. He’ll probably be one of many. I predict that “Alan Garner” will be the Austin Powers of Halloween 2010, especially if you already have a beard.

Not me, though. My beard is probably good for Hagar the Horrible or a homeless guy. I don’t want to be either of those, though. In fact, this Halloween, I might chop the whole thing off in order to be You Had to Be There!-era Jimmy Buffett. Whatever I end up doing, I’ll be confined behind the bar at work. If I had my druthers, I’d probably head to the West 7th Street corridor. Lola’s Saloon has good shows all weekend, with Halloween parties featuring Eleven-Hundred Springs on Friday and The Orbans, Calhoun, and magician Ash Adams on Saturday. Pre-party at 7th Haven or Poag Mahone’s and then head down the street. I hear The Orbans are planning something for the holiday, so you won’t want to miss it.

If those bands aren’t your thing, you’ll probably want to spend Saturday at Caves Lounge in Arlington. It’s one of those rare occasions where they have music, and Saturday night is a free show featuring The Phuss and The Dangits. I’m sure someone will be dressed up in a Misfits costume. Other shows around town you’ll want to look scary at are The Me-Thinks, the aforementioned Dangits, and Pinkish Black at The Grotto on Friday and the up-and-coming, New Order-ish Phantom Caste at The Moon with Fate Lions and others on Saturday.

That’s where I’ll be, anyway, The Moon. Except on Sunday. On the actual All Hallows Eve, The Chat Room will be filling up with evil. Featuring Pinkish Black, Transistor Tramps, and the sickening, Lovecraftian prog-metal of Denton’s Vault of Zin, the Chat will burn your very soul with waves of punishing tritons and shambling synthesizer menace. And better yet, the show starts at 9 p.m., so you won’t even be out that late. I mean you can, if you want. I probably will. Jimmy Buffett definitely would. –– Steve Steward

Here’s the thing: I’m a third-generation Giants fan, and nothing will ever change that. However, I have jumped on the ’Gers bandwagon this year, and I was super-stoked when Feliz fired the final pitch past A-Fraud. After all, at that point, the Giants’ post-season future was still a proverbial fly ball lost in the lights. If the Rangers should beat the Giants, I probably won’t mind.

The great thing for me about the Rangers’ division championship was watching it happen from Lola’s. The front patio was mostly full, and I had just ordered a High Life (probably brewed right down the road) when Alex Fraudriguez stepped up to the plate. Legendary bartender Carl Pack was sitting at the bar. Feliz threw the first strike, and Carl handed someone his crutches. “In case I tip over if they win,” he said. When the game-ending strike smacked into Bengie Molina’s mit, and the bar erupted into thunder, high-fives and rounds of shots all around, it was one of those moments that can never be repeated. In the 14 or so years I’ve lived in this town, I will never have a moment more Fort Worthian than that one. Good luck, Rangers. I can’t wait to see what happens next Wednesday. — S.S.