Other than “Who will take care of me when I’m decrepit?,” Chow, Baby’s only regret over having had cats instead of children is the missed opportunity for passing on its decades’ worth of accumulated trivial knowledge. For example, “Don’t cut that steak open to see if it’s done; you’ll lose all the juices. Easy trick: Hold your middle finger and thumb together, and poke the muscle under the thumb, using a finger on your other hand. When your steak feels like that, it’s perfectly medium rare.” You can’t tell this to a cat. Cats don’t have thumbs. 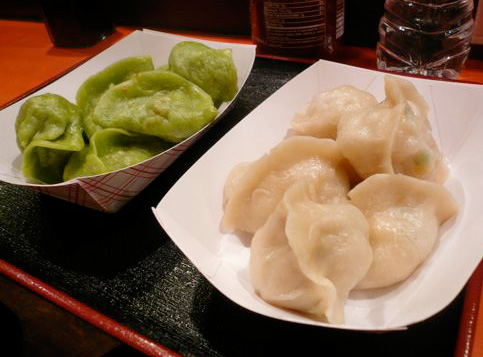 In fact (the trivial knowledge continues), the poke test is a fun way to judge not just the steak but also the steakhouse. You know how the first thing servers say when they bring out your steak is “Cut into it and make sure it’s cooked right”? If you don’t cut into it and instead just press on it and say “Yep, that’s fine” — or even more pretentious, “Yes, that’ll be perfect after it rests another two and a half minutes” — you can tell a lot about a place by the servers’ reaction. Some will look at you sidelong like you’re a crazy person (this happens to Chow, Baby too often to list all the restaurants). But servers who know that poking is better than cutting will nod approvingly, give you extra-great service for the rest of the meal, and probably even flirt with you (Del Frisco’s, J.R.’s Steakhouse, Lambert’s). And that, children, is how you choose a steakhouse.

Chow, Baby also would have enjoyed passing on to Chow, Bitty Baby and Beloved Jr. its vast store of menu words in foreign languages — and not just the easy ones, like the Spanish word for “goat.” When you’re in a foreign country, or in Arlington, it’s only polite to try a bit harder than the point-and-mumble. This week, thanks to the six-page bilingual Chinese/English menu at ABC Seafood (2420 E. Arkansas Ln., Arlington), Chow, Baby is learning the words for fire pot (lau, most $15.95), sizzling platter (nu’ong vi, most $10.50), shark’s fin (vi ca, $38), and stir-fries (starting at $7.95) with crab (cua), shrimp (tom), scallop (so diep), chicken (ga), pork (thit heo), beef (thit bo), and duck (thit vit). And the best Chinese phrase of all: dim sum.

To experience the parental satisfaction of forcing someone you love to either use chopsticks or go hungry, Chow, Baby and the beloved visited ABC Seafood with friends who were dim sum newbies. Alas, it was Chow, Baby who made the baby mistake of pointing at everything on the very first steam cart to trundle by: the dumplings cart, with shrimp in rice paper, steamed dumplings of all sorts, fried shrimp balls, fried pork dumplings, meat-filled steamed buns, and many delicious indescribables ($2.50 to $5.75 for two or three pieces). That left barely any tummy room for amazing crispy-skinned barbecue pork and nothing but a mournful wave-off for the fried-food cart, the chicken-feet cart, the Chinese broccoli (and other veggies) cart, and, saddest of all, the dessert cart, with those cute little egg custard pies. The lesson for the next generation: Don’t be so grabby. ABC Seafood has a lunch dim sum six days a week (not Mondays); you can always stuff your face again tomorrow, dear.