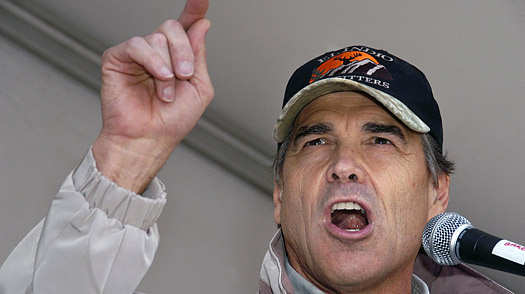 Although folks of a left-leaning persuasion have plenty to gripe about after Tuesday’s elections, the world continues to turn. Congressional Republicans are already willfully misreading the results as a mandate against Obama rather than an outcry over the godawful economy. Now it’s time to watch them badly overreach.

One thing is a teensy bit disturbing, though – the national press insists that Rick Perry secretly wants to run for president in 2012 even though he says he doesn’t. President Perry? Cue the collective eye roll and derisive snort. The U.S. electorate is not like the Texas electorate – American voters would run away in droves from his abrasive cowboy style and record of gubernatorial shenanigans, right?