Stop me if you’ve heard this one: There’s this tightly wound business guy who has to get across the country to be with his family in time for an important day. Through no fault of his own, his original and totally reasonable travel plans get upended by a bumbling idiot who turns out to be bad luck incarnate. Saddled with this overweight boob, our unfortunate hero is forced to make his way home via a series of planes, trains, and automobiles. Hilarity ensues, and when it’s all over, you pontificate about why John Candy was a million times funnier than Chris Farley.

Since Planes, Trains, and Automobiles is now proverbially old enough to drink at a bar, one could make the case that the Steve Martin-John Candy vehicle named for vehicles is a classic comedy, and as such, you could cynically expect it to be remade. While director Todd Phillips has not given us an out-and-out remake in Due Date, the plot is familiar enough to remind you that you’ve seen all this before. 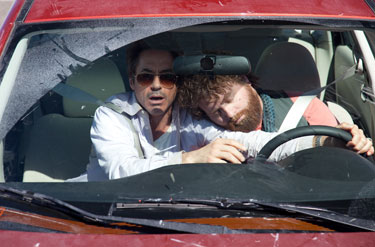 Robert Downey Jr. stars as Peter Highman, a Type-A Los Angeles architect who is about to be a dad. All he has to do is make it from Atlanta to L.A. in time for his wife’s C-section. Highman is the sort of put-together adult who works hard so he can fly first-class without stopovers in Phoenix. It’s easy to imagine that when his itinerary becomes null and void, the complications of a road trip from Atlanta to L.A. are inversely proportional to the simplicity of a direct flight.

The complications arrive in the form of Ethan Tremblay, a bearded, permed, aspiring actor played by Zach Galifianakis. In Due Date, Galifianakis takes the same earnest, sorely misinformed naiveté displayed by his Alan Garner character from The Hangover and pegs the dial to 10. Given Galifianakis’ current level of exposure, you might think this bit is tired, but when paired with Downey’s frustrated, icily articulate, vitriol-spewing grownup, Galifianakis lands most of the jokes, informing them with dowdy sincerity that makes gags, like sunglasses at night, way funnier than they have a right to be.

Unfortunately, the funniest bits in Due Date are throwaway lines largely improvised by Downey. We are supposed to pee our pants over Danny McBride as a paraplegic Iraq veteran beating the shit out of Highman, but it’s a Highman dig about the vet’s penchant for Chili’s that’s the funniest part of the scene. When a federal airport security agent (rapper RZA) finds some weed in a magazine bag that Highman mistakenly grabbed, Downey says, “I’ve never done drugs in my life.” The movie is peppered with similar in-jokes, but Phillips would rather showcase broad physical comedy and outlandish destruction.

Given that Due Date is a road-trip movie, Phillips moves it along episodically from one unfortunate stop to another. Is it funny that Tremblay is allergic to waffles? Probably not, but if it means that Phillips can make a slightly funnier joke about it later, we can let it slide. In all fairness, lackluster jokes set up in the first act tend to reappear in funnier forms later on. After a while, though, a person can take only so much inanity.

Tremblay’s increasingly criminal lack of self-awareness makes sense when he’s jerking off while Highman is trying to fall asleep, but after it forces us to believe that a person can fall asleep at the wheel, plow through a safety barricade, and awaken only after rolling a Subaru off an overpass, you yearn for another subtle, vicious Highman aside. Phillips likes to ratchet up the absurdity (anyone seen Mike Tyson’s tiger?), but by the time Tremblay has hijacked a Mexican border patrol truck pulling an office trailer, you kind of wish they’d just get to L.A. already.

Luckily for Phillips, Galifianakis is more than a single-note character actor. Tremblay is headed to L.A. with the hopes of a role on Two and Half Men, because he wants to make his recently deceased father proud. When Highman goads him into an impromptu acting workshop in a gas station bathroom, Tremblay’s latent grief is very real. Galifianakis is a talented actor whose dramatic turns deserve as much notice as his comedic gifts.