Good lord, Chow, Baby could have flown to New York with a change in Atlanta in the time it took to drive across Arlington to Brooklyn’s Best Pizza & Pasta (2425 SE Green Oaks Blvd.). Was the trip worth it? Short answer: Yes indeed.

The long answer begins with road-weary Chow, Baby at the counter not-quite-whining, “These slices don’t look very greasy.” They were certainly pretty: bubbly mozzarella and a schmear of fresh tomato sauce, razor-thin and prime for folding. But when Chow, Baby eats New York-style pizza, it wants to wear the drippy evidence on its shirt for the rest of the day. Pizza Guy not-quite-condescendingly explained the thermodynamics of grease (it doesn’t drip when cool), demonstrating with a pepperoni slice ($2.05) hot from the oven. Mmm, drippy. And very tasty. 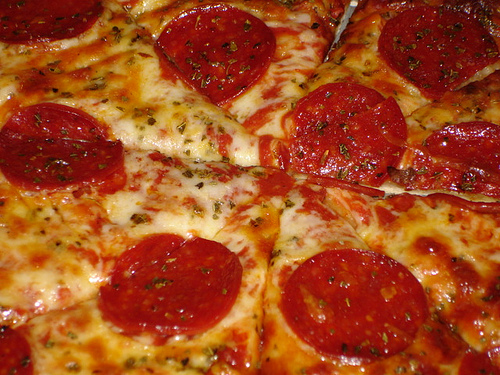 But something else about Pizza Guy’s grease speech was bothering Chow, Baby: Where was the throaty “Yo!”? Where was the broad a, the non-rhotic r, the front-rising diphthongs — where was the Noo Yawk accent that you want to hear while grease drips on your shirtfront? “So you [sic] not from Brooklyn, huh,” said Chow, Baby in its best Flatbush-ese, still chewing on a crust so perfectly fight-you-back that you’d swear it had been made with real Noo Yawk water. Wrong again: Pizza Guy, now to be known as Brooklyn Pizza Guy, was born in Coney Island Hospital and attended a long list of schools beginning with “P.S.” Satisfied with his cred, Chow, Baby began planning its to-go order: “So what kinda sausage you put on your pizza (extra large, $11.49 plus toppings)? Oh, Italian sausage? Huh.”

That last question, and the ones to follow (“Are your mushrooms fresh?”), were now just Chow, Baby having fun poking the Brooklyn bear. Artlessly wondering if it could take a frozen lasagna ($6.99) to go — “freezer” being a known fighting word in Brooklyn pizzerias — Chow, Baby was sternly informed that Brooklyn’s Best does some morning prep work for their pastas ($6.49-9.99) but assembles and bakes to order. No freezing here! (Result, after midnight microwaving: flavor-bursting filling, al dente noodles, fresh mushrooms, and for a buck extra a couple of savory, herb-flecked housemade meatballs.) “So, your cheesecake: That’s light and fluffy, like at Cheesecake Factory?” If looks could kill! No, it’s the real thing, dense and rich ($3.49) — well worth standing on line for, yo.

Through the Smoke Hole

With a hat tip to Fort Worth Hole in the Wall, the only food blog Chow, Baby regularly steals from: Smokey’s Barbecue (5300 E. Lancaster Ave.) is smoking again. Chow, Baby had given up on this Eastside stalwart two years ago, having been jerked around by near-annual ownership changes and near-weekly menu changes. But the current owners, as of summer 2009, have brought it back old-school, with marvelously moist smoked chicken and turkey; thick-crusted pork ribs that were almost too lovely to eat; chopped beef in a perfect proportion of bark to juicy bits; all-beef kielbasa with just a hint of jalapeño; and chewy, well-flavored brisket (two-meat combo $10.99).

Everything that can be made in-house is, from the thick, peppery barbecue sauce to the gooey-delicious vanilla buttermilk pie ($1.95). Chow, Baby concurs with its favorite food blogger: Smokey’s gets a 4-Hole rating. Though that sounds a lot better when the Hole says it.