Fort Worth’s one-of-a-kind Prairie Fest might soon be none-of-a-kind. The city’s unique festival, approaching its sixth anniversary, is tottering on the brink of extinction — only an influx of new volunteers is likely to save it. The amount of work required to present the festival has grown drastically in the past couple of years.

“Everything about it has gotten more complicated,” Prairie Fest founder Don Young said. “All of us were completely exhausted by last year’s festival.”

Several longtime volunteers scaled back their efforts for various personal reasons, and others have been slow to take up the slack. This puts an increased burden on Young, who is the festival’s heart and soul but also is struggling to adjust priorities in his life. 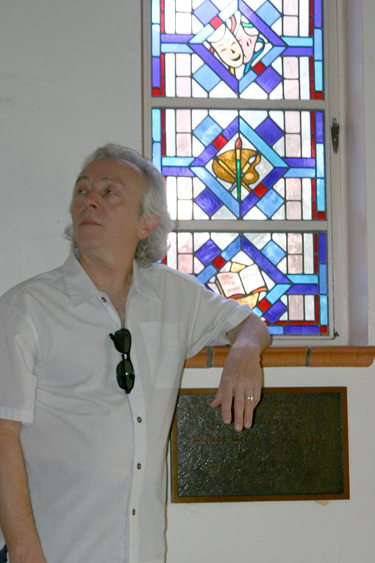 Over the past six years, Young carved a reputation as a passionate activist fighting for environmental issues in a city that keeps opening its doors wider and wider to the gas drilling industry. His activism stemmed from a desire to resist drilling at Tandy Hills Natural Area, the 160 acres of rolling hills that welcome motorists driving along I-30 near Oakland Avenue.

The independently wealthy can make a fulltime quest of fighting city hall, but Young is far from flush. He lives in a modest 1950s-era brick home just south of Tandy Hills park. Behind the house sits Young’s workshop where he makes art glass. The problem is, Don Young Glass Studio hasn’t been creating and selling much glass in recent years while its owner battled captains of industry and city bureaucrats on various fronts.

“I’ve neglected my business,” he said. “Without that I can’t do anything. I have to have a job.”

For 40 years, Young has created stained glass and etched glass for windows, signs, doors, plaques, and murals. His early career was geared more toward residences, but now he focuses mostly on commercial projects. His creations can be seen at several All Saints Health Systems facilities, Azle Public Library, Bass Rehearsal Hall, and many local churches.

Re-establishing his business means less time to spend on activism, and he’s afraid that his beloved Prairie Fest might disappear unless he finds some help.

“It’s like a mini-Mayfest — except they have hundreds of people working on that one, and some of them with pretty big salaries,” Young said. “I’ve been doing Prairie Fest out of love all these years. We don’t make enough money to pay me a salary. We make enough money to put on another festival the next year, or put money aside for the master plan at Tandy Hills, or maybe even to buy some adjacent property for parkland if that comes up.”

Losing the festival would leave a gaping wound in Fort Worth’s green movement. Prairie Fest began in 2006 as a small, casual celebration of the outdoors, hosted in Young’s front yard. A handful of tree huggers showed up, had a good time, and grabbed attention for the oft-overlooked Tandy Hills. It’s no coincidence that the festival is held in the spring when Tandy Hill’s acreage is awash with colorful wildflowers.

The first couple of festivals were relatively quaint. Young pulled them off with little help or encouragement from the city. As founder of Friends of Tandy Hills Natural Area, a group devoted to conserving and restoring the park, Young was a vocal presence at various gas drilling meetings and hadn’t exactly endeared himself to city leaders and department heads who embraced drillers (and their royalty checks) like long-lost friends.

Collaboration between the activist and city employees eventually became a necessity — festival attendance was booming by 2008. With popularity came more demands, and Young was juggling insurance policies, security, city permits, street closures, and any number of other tasks endemic to bringing several thousand people to a neighborhood park. Festival organizers officially partnered with the city for the 2010 festival, and an estimated 5,000 visitors listened to live bands performing for free on a solar-powered stage. Electric vehicles and pedicab shuttles were used instead of gas–fired vehicles. Plant experts led organized tours of Tandy Hills. Informative environmental booths were sprinkled among the 100 vendors.

And the whole thing was put on with no sponsorships from gas drillers or any other corporate entities that might be unfriendly to environmental causes.

“It would be a shame to let the festival go because it’s so unique and wonderful,” said Jenny Conn, a devoted volunteer for four years. “It’s real Fort Worth. It’s clear to its mission, which is to bring people into the park. It celebrates the environment, and it is really all about beauty in life, art, dance, music.”

Conn’s volunteer title has been “vendor wrangler,” a job that grew more taxing as the number of vendors increased. A new grandmother, Conn is one of the volunteers who are scaling their participation.

“It’s an enormous amount of work,” she said. “It usually starts around August with monthly meetings, and I would go home and spend increasingly more hours the closer it got to the festival. It absorbs your real life,  and  since I’m a working girl, it’s been overwhelming the last couple of years. I’ve enjoyed every minute of it, but I need a break this year.”

With April’s festival date looming, Conn is nervous but hopeful that other volunteers will step forward and give Young the help he needs.

“It can be done but not without a massive infusion of volunteer help,” she said. “I’d hate to see it go away. It will be tough, but Don Young can somehow manage to do anything. He’s sort of a little wizard. He’s got the magic power.”

Young’s pied piper nature has attracted many volunteers over the years. But fighting city hall and watching gas drillers being courted by elected officials at the expense of neighborhoods have taken a toll on Young. He’s less optimistic. His bitterness and vitriol have grown. Recently he’s considered putting his house on the market and leaving Fort Worth, which he’s dubbed Dirty Ol’ Town.

“I have built up such a disdain for gas drilling that I can’t stand it anymore,” he said.

At the same time, he tries to bite his tongue because he loves Prairie Fest and wants it to survive. He realizes volunteers will be hard to come by if they sense that his enthusiasm is dwindling.

“I’m not tired of Prairie Fest,” he said. “That’s one of the good things that I don’t want to leave.”

Phillip Hennen helped organize the first festival and has been a vital volunteer ever since. He’s not ready to bow out, but he knows his limits. “Don Young and I can’t take on the work other folks were doing,” he said. “We’re already pretty overwhelmed ourselves.”

Volunteer Jim Marshall has kept track of the festival’s accounting for several years. He too is ready to relinquish some responsibility but is willing to continue until he can groom a successor.

“I’m hopeful some people will step up and say, ‘This is how I’d like to help the community,’ ” he said. “Maybe somebody will read this story and say, ‘That’s what I want to do. I’m capable, and I’m willing to step up and take charge.’ ”