The Ridglea Theater got a stay of execution in October when Bank of America gave up on plans to overtake and remodel the building, and this development is a relief to hordes of local musicians and music fans. The downstairs room can be a little big and impersonal to me, and the venue hosts way too much metal, but Villain Vanguard’s Beef (a.k.a. Justin Williams) would rather play the historic theater’s stage than just about anywhere else on Earth. That’s why the Latin-funk pop band chose the venue for the Nov. 12 release of McMontezuma’s Revenge, VV’s long awaited sophomore effort. 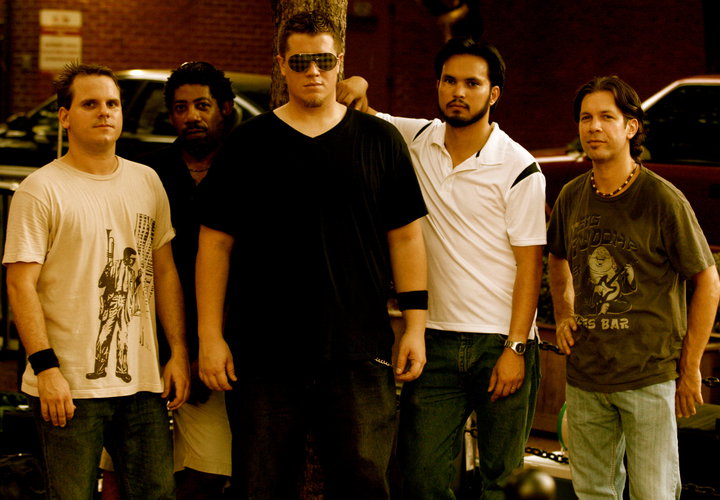 The Villains are some of my favorite people in town, and they invited the swell folks in Rabbit’s Got the Gun to open the show, so I had been planning on attending for weeks. The addition of Cosmic Trigger and hip-hop duo Big Cliff and J. Kush made the evening even more enticing. Such a varied lineup could please any set of ears.

Unlike every other act that walks the big Ridglea stage, Cliff and Kush make their bread and butter out of improvisation. The two friends, who have been opening RGTG shows since the beginning, recently started gigging on their own. That night, DJ DreDay brought his turntables to provide the push over which the guys let their words loose. The Ridglea management seemed confused, but the several dozen early attendees ate it up.

Deric Merrill of D Snacks and the After School Special sang briefly alongside Cliff and Kush, and, on an improvised closer, Californian Cuddy Lo rapped while RGTG bassist Justin Baisden made the whole thing funky. Sound chaotic? It wasn’t. These hip-hop artists are like the eye of a hurricane in the way they make sense out of chaos.

Much to the sound guy’s relief, the whole experiment ended in time to allow Cosmic Trigger to set up. The hip-hop fans retreated to their plastic cups of scotch on the rocks at the bar while the metal fans (who spend more time at the Ridglea than anyone) assembled in front of the stage. Cosmic Trigger is a side project of the two brothers in Addnerim, guitarist/frontman Tyrel Choat and bassist Dusty Choat. The band used two basses (!), covered Deep Purple, and was as practiced as Cliff and Kush were freewheeling.

As RGTG frontman Kewaithian Freeman set up his drummer Gump’s kit, I wondered if the chaos of the night might finally erupt. Would Gump, whom other drummers idolize, show up in time? Each of the Villain Vanguard guys voiced concern to me that schedules might not be honored.

Instead of worrying about someone else’s show (and about things I couldn’t control), I walked to the bar and ordered another $3 Lone Star beer. Ron Geida, the Villain’s guitarist, kindly bought it for me and explained how he would be carefully maintaining a one-drink-per-band limit for himself. Smart, Ron. No professional guitarist should headline a big show while drunk.

Gump showed up sometime during the setup –– he is nothing if not punctual –– and Rabbit’s Got the Gun fired up its last show before a massive guitar player overhaul. Kewaithian prides himself on his knack for pumping up the crowd, and his intense effort, coupled with the increasing drunkenness of the crowd, did result in some general fan rowdiness. Keeping with the guest performer theme of the evening, Rabbit invited Alexis Ryann, who couldn’t have been more than 12, to sing along on her favorite song, “Lightning.” Ryann looked a little nervous at first, but she warmed up once the crowd started encouraging her. She killed the song. I even shed a little tear, partly because of being inspired by a pre-teen girl who is unafraid to give her all on stage and partly because I know I will never be able to sing as well as she can.

By the time Villain Vanguard hit the stage, the crowd was hyped and ready. Never one to disappoint, Beef walked onstage behind a silver sheet ceremoniously carried by several female friends. The band knows how to transfix a crowd, so the haze I was experiencing had to be a result of some black magic rhythms rather than the three beers I had consumed.

At the end of the night, I had officially joined the ranks of the “happy the Ridglea is still here” crew. Unlike the more intimate environments of The Moon and The Grotto, the Ridglea allows for a separation between the band and the audience. The tradeoff is worth it, especially when you consider the extra breathing room and the killer sound. (Kudos to the folks tweaking knobs last weekend. The sound quality was worth the trip alone.) The best part of the night, though, was the diverse crowd, which is the only kind of crowd worth joining. I heard only one complaint –– that the Ridglea didn’t serve wine –– but really, who needs pinot noir with live music? Live a little, drink some vodka, and be grateful that one of the Fort’s best and most unique venues is still living too. –– Caroline Collier