Currently all the members of the avant-garde pop quartet Skeleton Coast live in the same house. Singer-multi-instrumentalist Bobby McCubbins, singer- multi-instrumentalist Ryan Torres, bassist Mike Best, and drummer Brian Garcia share a four-bedroom place near the Cultural District. Given their eccentric, theatrical sound and the fact that all the guys are in their 20s, you might assume many varieties of debauchery and rawk ’n’ roll shenanigans occur in that residence. McCubbins says, eh, not so much. “We wake up and go to work and then practice music at night and go to sleep,” he said. “Our lives are pretty fluid right now.” 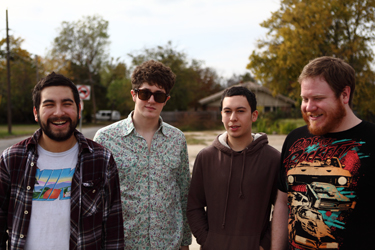 Skeleton Coast was formed last March after McCubbins went to a party and met the other three members, who were playing in a traditional pop-rock guitar-bass-drum outfit called Gold Jungle. Torres said that McCubbins, whose strong vibrato vocals are sweet and piercing at the same time, brought “atmosphere and texture” to the group. And everyone in Gold Jungle was itching for a change in direction. “We knew a certain amount of energy was missing from our music,” Torres said. “I wanted to develop my vocals and do more keyboards. Bobby helped us evolve.”

Skeleton Coast’s recent performances at the salon/nightclub Esoterica and  The Grotto’s Halloween night bill with the Hanna Barbarians drew attention to Skeleton Coast’s unique soundscapes: ethereal but punchy tunes in which keyboard, guitar, and digital sound effects interweave. The band is an unusual sight live because McCubbins and Torres stand before their keyboards with guitars strapped on, quickly switching from strings to keys apparently on a whim, often in the middle of a long tune. They also share lead vocal duties, although Torres insists that McCubbins is the real star in that area. The final result has been variously described as “jungle pop” (for the tribal beats occasionally employed), “melodramatic pop,” and “Zelda meets My Bloody Valentine.” Influences include The Beach Boys, Modest Mouse, Pink Floyd, and Roy Orbison (one of McCubbins’ favorite singers).

The lyrics, co-written by McCubbins and Torres, can change from show to show depending on the guys’ mood, but they’re not interested in writing bad poetry for bad poetry’s sake. Some of the tunes have a barbed message –– “A Critic Not a Writer” is about hipsters (and possibly some music scribes) who diss music they know nothing about, and “Freeloaders” is aimed at people who take advantage of other people’s generosity.

Right now Skeleton Coast is preparing to record a two-song demo at producer Robby Baxter’s Red Star Recording Studio in Arlington. They’re taking a break from live shows to write more tunes but should return to area clubs by late December or early January. McCubbins said they’d eventually love to play for national audiences, but first things first. With the band still so new, they’re keeping their sights modest, focusing on gigging, doing an EP after the demo, and then doing a concept album, all while building a local fan base. The latter appeals to McCubbins most. “I’m excited about the Fort Worth scene right now,” he said. “There’s a lot of diversity, a lot of great music happening. People younger than us are getting out of high school and forming bands and entering the scene. It’ll be great to see what the next year brings.”