Arts Goggle is a Near Southside event held twice a year in the spring and fall, with nearly 70 venues hosting art shows and music. But this year’s fall event featured something extra — an unusual form of guerilla theater, what amounted to an attempt to redesign a city street without permission from Fort Worth.

Fort Worth South Inc., the private nonprofit that is working to develop areas like South Main Street and Magnolia Avenue, sponsors Arts Goggle. The two events each year bring thousands of people to the Near South Side, and the visitors generally walk among the venues rather than driving. In essence, Arts Goggle helps promote what planners call walkable urban neighborhoods. 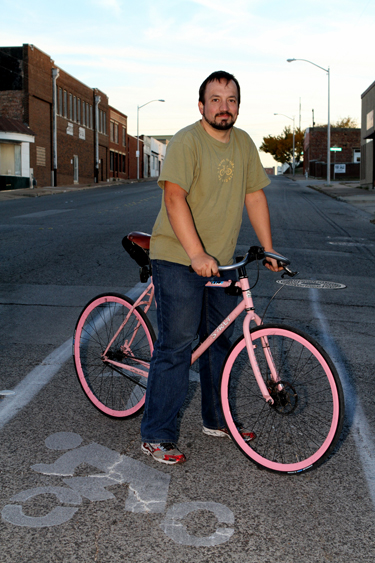 Since 1995, Fort Worth has included a redesign of South Main in its master plan. Nearly $800,000 has been appropriated through a federal grant to make the street more pedestrian-friendly, with wider sidewalks, fewer car lanes, and possibly bike lanes. But as is always the case when dealing with various government agencies, progress has been woefully slow.

So in October, activists pushing for better “walkable urbanism” street design and development decided to take matters into their own hands. Without permission from the city of Fort Worth, these “guerrilla urbanists,” as they refer to themselves, painted bike lanes on South Main, reduced the street from four traffic lanes to two, painted a an Abbey Road-style crosswalk in the street, and moved mobile food vendors and art shows into curb spaces that were traditionally used for automobile parking. Even though the changes were made specifically for the October Arts Goggle event, the bike lanes and crosswalk painted then are still there, though cars have moved back into the streetside parking spaces.

The part of the street that was altered is only a few blocks from South Main’s intersection with Vickery Boulevard. But the tweaking of this street without city permission represents a change in the thinking of those promoting urban infill neighborhoods and development. Their goals — such as slowing down traffic — are not what Fort Worth residents usually work for. They want to reduce lanes, remove parking spaces on the street so that sidewalks and the street are better joined, and make the area safer for those on foot and on bicycles.

“We just figured that the Arts Goggle event was a good time to expose all the people coming down here to see what this area could be, how we could combine pedestrian traffic, bicycle riding, and automobiles in a space that worked for all, not just cars,” said Bernie Scheffler, owner of Trinity Bicycles on South Main and former chief of staff for State Sen. Wendy Davis. Scheffler has also run unsuccessfully for Fort Worth City Council.

Scheffler estimated that it cost about $500 for the paint and cardboard cutouts for the bike rider images in the center of the bike lanes. It took only about four hours the night before Arts Goggle to make the changes, and volunteers redirected traffic on their own to allow the paint to dry. Police drove by about four times, Scheffler said, but did not stop even though private citizens had closed half of a public thoroughfare.

As for not going through the city’s transportation department to get permission, Scheffler said, “We had a timeframe we needed to do this in, and we decided it would be best if we just did it ourselves without the bureaucracy that we’d have to deal with from the city.” Scheffler and representatives of Fort Worth South said they have heard nothing from the city about whether the painted bike lanes and crosswalks were permissible under city code.

City spokesman Bill Begley told Fort Worth Weekly on Tuesday that the city’s transportation department was “not aware of what was going on [on South Main], and we are consulting with our legal department to see what [Fort Worth’s] next steps might be.”

Even more surprising than the group’s decision not to notify the city of their plans is that the Fort Worth urbanists used similar projects in Dallas’ Oak Cliff neighborhoods as a model. And, yes, the Fort Worth guerillas consulted with the Dallas folks on the first of what they think will be more projects in the future. Fort Worth and Dallas working together on city issues — what a concept.

Jason Roberts, who has helped plan two similar street redesigns in Oak Cliff, said Scheffler and others approached him, “and we just gave them advice on what works and what doesn’t,” he said. “Our projects are born out of frustration in how we have to deal with Dallas City Hall, and I’m sure it is the same in Fort Worth.”

Kevin Buchanan, part of the urban guerilla group, oversees the Fortworthology web site, which promotes better urban design. He said the overlap with the Dallas group was “that we both believe in livable neighborhoods, and [we] wanted to get their input. Honestly, we want to make this more permanent, but there are a lot of factors at play right now.”

The idea of redesigning South Main and other Near Southside streets is part of the plan on which the city has been holding meetings with stakeholders for about 15 years. Dealing with city, state, and federal governments  has complicated and delayed the process. That’s one of the reasons Scheffler and others decided to take the DIY approach: They were tired of waiting.

A $770,000 federal grant that promoted sustainable urban growth from the U.S. Department of Transportation has been applied to the redesign, but more funding is needed — and no one knows exactly how much it will cost to widen sidewalks, add trees and landscaping in front of businesses, reduce the number of car lanes, or even how much of South Main would be included.

“We have a lot more steps that have to be taken [to get a final master plan], from getting the funding from the federal government and Texas Department of Transportation,” said Eric Fladager, a city planning manager who is working with property owners in the redesign. “We don’t know if it will go to two lanes with a center turning lane, how much we might like to expand the sidewalks, or whether bike lanes will be a part of that. Everything changes if the streetcar line becomes a part of the street.”

The consulting group hired by the city to study streetcar lines recommended that South Main from downtown to Magnolia Avenue be part of the starter system. But the city is now waffling on whether to build the streetcar system and is even considering rejecting a $25 million federal grant that Fort Worth applied for and won earlier this year.

Some of the streetcar issues could be resolved in the next week or so. The city will host a town hall meeting on the subject of streetcars at the Fort Worth Convention Center on Thursday, Dec. 2 at 7 p.m. At its regular meeting on Dec. 7, the council will vote on whether to move forward with the streetcar project or kill it and reject the federal grant.

If a streetcar line is eventually built down South Main, bike lanes may be lost because of space considerations. But that doesn’t deter Scheffler from supporting the streetcars. “We just want to make walkable and bikable urban neighborhoods on the Near South Side, and streetcars would still be a part of that,” he said. “We just don’t want cars coming through here at high speeds. We want to slow them down. The streetcars would have the effect of slowing down traffic.”

Robert Kelly, an architect who offices near Scheffler’s bike shop, said the Arts Goggle street changes were “great, because they showed the public what it might look like if this area was more pedestrian-friendly with slower traffic.” Kelly serves on the city planning commission and chairs the Fort Worth Urban Design Commission, so he has an insider’s perspective in dealing with the city on urban development issues.

“I sit on those commissions, so I know there is always a lot of junk to deal with when citizens want to make changes,” he said. “I understand why these folks wouldn’t want to go through that whole process to do what they wanted to do.

“The South Main Street redesign and the streetcar line would be part of the continued investment the city has been making in good urban neighborhoods,” Kelly said. “There will be slower development if we don’t make those changes. My advice to the city is that if you can’t help us, just don’t hurt us.”