Joe Sturgeon joined the staff of Casa Mañana as Director of Theater for Youth in July 2009. He’s directed many of the kids’ shows there and acted in some of the adult productions –– in October, he played Melvin P. Thorpe in Casa’s staging of The Best Little Whorehouse in Texas. Best of all, Casa has allowed the Kentucky native to make a 30-year-old dream come true: to adapt and stage a live musical version of the 1964 Arthur Rankin Jr./Jules Bass stop-motion TV special Rudolph the Red-Nosed Reindeer.

“I like all the Rankin/Bass holiday specials, but Rudolph has more heart than the others,” said Sturgeon, 45. “When I was a kid, it only played once during the Christmas season. I’d circle the date in the TV Guide, and no one could touch the television that night. I was fascinated by the characters.” 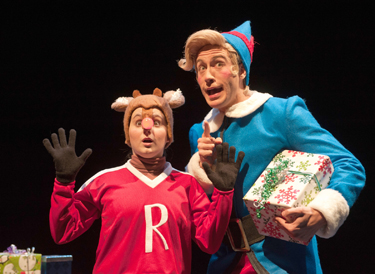 For anyone who grew up watching TV during the last 50 years, Rudolph hardly needs an introduction. Expanding on a 1939 story by Robert L. May and the 1948 jingle by Johnny Marks (the two were brothers-in-law), the show featured the title character struggling to earn the respect of his peers despite his glowing crimson schnoz. He becomes friends with a misfit North Pole elf named Hermey, who’d really rather be a dentist. Together, the two befriend the blustery, bearded prospector Yukon Cornelius (who’s searching for peppermint lodes), visit the melancholy Island of Misfit Toys (including a cowboy on an ostrich and a squirt gun that shoots grape jelly) ruled by the winged lion King Moonracer, and are pursued by the Abominable Snow Monster, who in the end is the only character tall enough to put the star on top of the tree.

Sturgeon had thought Rudolph would make an excellent stage musical for kids ever since he was a teenager studying theater, but he didn’t make a serious stab at adapting it until a year ago, when Casa producers greenlit the project. After transcribing the teleplay by hand while watching the DVD, Sturgeon researched the Rudolph rights and discovered they were shared by the estates of Marks and May and managed by a licensing company out of Connecticut called Character Arts. That company, in turn, did a little research on Casa to reassure themselves that the Fort Worth institution could put on a full-budget professional version. Character Arts ultimately gave Casa permission to produce the story’s world premiere as a stage musical.

“They also gave us the rights to several other Johnny Marks songs [not in the TV special], including ‘Rockin’ Around the Christmas Tree’ and ‘Run, Rudolph, Run,’ ” Sturgeon said. “Marks was a prolific writer of Christmas songs, which is interesting because he was Jewish.”

Casa’s designers and tech people went about creating costumes, sets, and onstage visual effects. Character Arts kept a proprietary eye on the show, down to approving the color of the costumes to make sure they matched the clothes on the original stop-motion models. Although most of the lead characters are played by adult Equity actors (including a 6′ 2″ man playing Hermey the Elf who, Sturgeon says, “nails the voice”), supporting and chorus roles are played by children in Casa’s youth program.

Before rehearsals began, Sturgeon showed the TV special to the kids on the Casa theater’s big screen. “We wanted to be faithful to the show, but we didn’t want to just mimic it,” Sturgeon said. “Some actors [in the stage version] are more closely aligned with the original characters than others. It’s like if you’re playing Winston Churchill, you research what Churchill sounded like and then you incorporate it into the larger performance.”

Suddenly aware that he has just invoked the great 20th-century wartime leader in reference to a Rankin/Bass special, the Rudolph nerd in Sturgeon defended the comparison with a chuckle: “These characters are so indelible they bear that kind of investigation.”

One of the biggest technical challenges was creating the Abominable Snow Monster. The designers ultimately built a 9-foot onstage puppet whose eyes, jaws, and arms are operated by different actors. After construction was complete, it occurred to Sturgeon that the Snow Monster was more than a little intimidating, but the solution to that came by accident when, during one tech rehearsal, the operators turned the puppet too far to the side and exposed their puppetry to the audience. This “gaffe” is incorporated into each live performance as a bit of slapstick business that allows kids to see for themselves that the beast is fake.

In the process of staging Rudolph, Sturgeon has learned more trivia than anyone should know about the 1964 holiday special. For instance, while the original version revealed that Yukon Cornelius is prospecting for peppermint rather than gold, that scene was inexplicably deleted for decades, leaving a couple of generations of kids wondering why Cornelius licked his pick after driving it into the ground.

And then there’s the rag doll on the Island of Misfit of Toys named “A Dolly for Sue.” While all the other playthings have defects of some kind, it’s never made clear exactly what made Dolly a misfit. Sturgeon discovered that in the original script her home was called the Island of Lost Toys –– the word “misfit” was never used. Still, this didn’t satisfy all Rankin/Bass-ophiles.

“One of the producers was interviewed about this on NPR years ago,” Sturgeon said. “When they asked him what Dolly’s problem was, he said, ‘I think she had abandonment issues.’ ”