Black Swan closely observes the world of high culture, and yet its thrills are distinctly, trashily lowbrow. That’s a difficult balancing act to pull off, but this movie does it with all kinds of skill and emerges as both one of the year’s best horror flicks and perhaps the best ballet film since 1948’s The Red Shoes. Either way, it sucks the breath out of you. 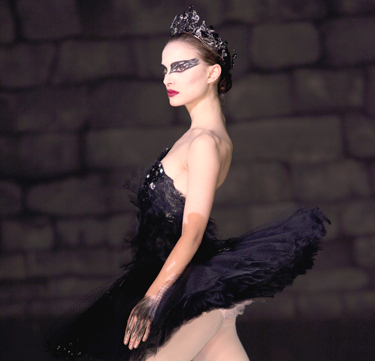 Nina Sayers (Natalie Portman) is a highly strung, relentlessly perfectionistic soloist at a fictitious New York City ballet company who gets the break of a lifetime when the company’s loutish French artistic director Thomas Leroy (Vincent Cassel) casts her in the dual lead role of Swan Lake: the fearful and virginal White Swan and the dangerously seductive Black Swan. The strain threatens to be too much for her, as Thomas sexually harasses her and harangues her at tedious length about how she’s too inhibited to dance the Black Swan. Nina eventually loses her inhibitions and with them her grip on reality as she’s plagued by terrifying psychotic delusions, most of which involve Lily (Mila Kunis), a fellow ballerina at her company who appears to Nina as a persecuting, sexually ravenous demon.

This is a nice companion piece to director Darren Aronofsky’s previous film, The Wrestler. Both movies take a realistic look at physically grueling professions that often chew up and spit out their best performers before they’re 40. (Also, they both end similarly.) We see in close-up the torture that ballet dancers put their bodies through to do what they do, including a squirm-inducing scene with a masseuse working on Nina’s rib cage and feet.

However, Black Swan has even more in common with Aronofsky’s 1998 debut feature, π, a paranoid thriller that also featured hallucinatory sequences arising from a gritty New York setting. The movie presents us with reality as perceived by Nina’s rapidly disintegrating mind. We can’t trust what we see, not when her reflections in mirrors start to behave in unreflective ways and certainly not when she has ferocious, animalistic sex with Lily, whom the film strongly hints isn’t there at all.

Most of the dancing is indeed done by Portman, and I can’t imagine how difficult it must have been for someone with Portman’s limited dance background to perform at this level or even fake it convincingly. (The Swan Lake choreography is by Benjamin Millepied, who also appears in the film as the dancer portraying the prince.) Aronofsky handles most of the dance sequences by placing the camera on the stage and filming Portman from the waist up, which not only conceals the feet — I’m guessing that someone else did the pointe work — but also places us inside the dance rather than observing it, thus enhancing the illusion that we’re experiencing the world through Nina’s eyes. At one point, the camera spins in place to show us Nina’s point of view as she pirouettes, a shot straight out of The Red Shoes.

The film steadily builds a sense of all-pervading dread. A series of doppelgängers menace Nina, appearing in both the mirrored surfaces around her and in Portman’s resemblance to her female co-stars (Kunis, Barbara Hershey as Nina’s frustrated stage mother, and Winona Ryder as a former prima ballerina being forced out by the company). These are unsetting but nowhere near as scarring as Nina’s visions of wounds and deformities being visited upon her body. The mere act of clipping her fingernails is rife with the possibility for bloodshed. Most films about performers transforming themselves into their roles depict that process as glorious and magical. This one depicts it as horrifying, never more so than the David Cronenberg-inspired scene when Nina looks in her mirror and finds her eyes gone blood-red and black quills sprouting from her back.

The last half-hour or so of the film takes on a hurtling, out-of-control quality, as the increasingly graphic hallucinations crowd thick and fast on her. Though Clint Mansell’s atypically lush piano-and-orchestra score (with a big assist from Tchaikovsky) accelerates the insanity, the film’s trajectory is clearest in the performance of Portman, whose hyper-intense acting style has never looked more appropriate to the setting. After starting out with a girl’s mannerisms and voice, by the end she’s dancing the Black Swan with a possessed look in her eye, the last vestiges of Nina’s sanity gone and the madness having completely taken over. It is profoundly scary.

The script is distressingly credible about Nina’s toxic relationship with her mom and the way the authority figures in her life infantilize her. Regrettably, it’s also full of drippy melodrama and shopworn ideas about how only crazy, self-destructive people can be great artists. If you apply real-world logic to this thing, it falls apart. Yet ballet has never been about real-world logic. It’s an art form that tells its stories in feverish, overwrought, heavily coded terms, so why shouldn’t a film about ballet do the same? This tale of an artist who seeks perfection — even if it means her death — plays itself out in bold primary colors and beautiful swirling motion, with a nod toward the sweat and labor behind it all. In that sense, Black Swan is a ballet unto itself –– and an exhilarating, crushing one.